Carnival Sunrise, more than a refurb 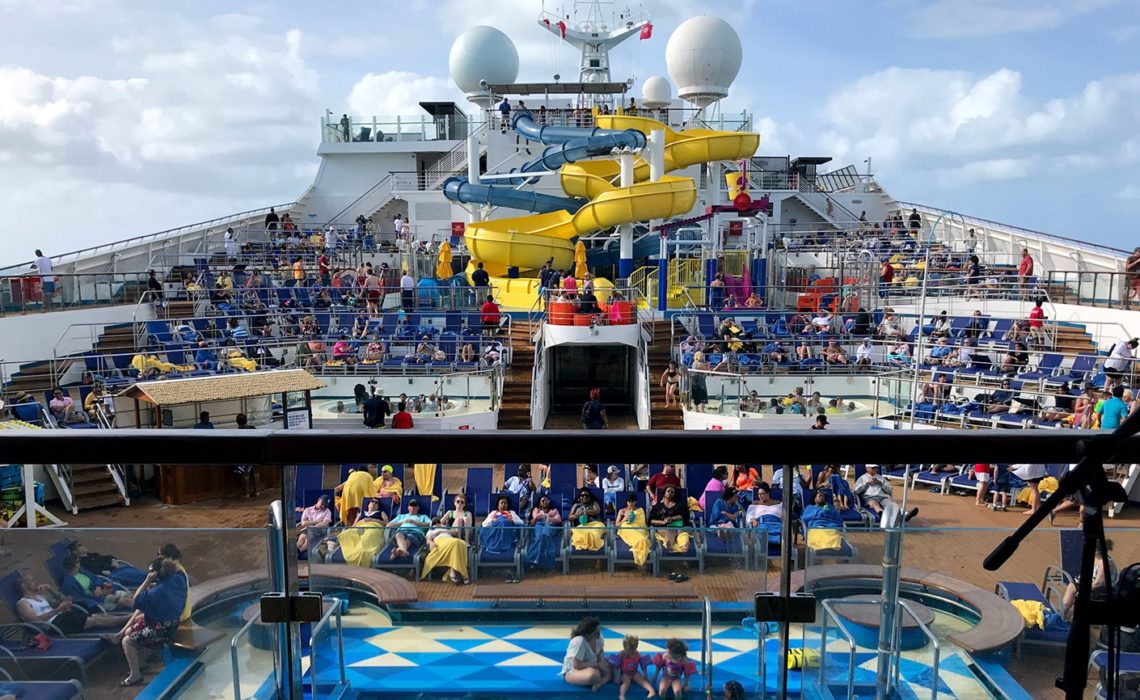 ONBOARD THE CARNIVAL SUNRISE — A nearly $200 million refurbishment has officially turned the Carnival Triumph into the Carnival Sunrise.

Many of Carnival Cruise Line’s latest concepts are in full force on the Sunrise. A ropes course anchors a cheerful sports pavilion out back, and the Serenity is full of grownups relaxing on wicker-style furniture and ordering from a menu of grownup-style drinks (e.g. the Serenity Martini: Bombay Sapphire gin, St-Germain elderflower liqueur and pineapple juice). Other hangouts include the Caribbean pub/live music venue RedFrog, joining other Fun Ship 2.0 concepts like the Alchemy cocktail bar and the BlueIguana Cantina and Tequila Bar and RedFrog Rum Bar, which face each other on the pool deck.

Normally, a refurb is a refurb, but Carnival Cruise Line president Christine Duffy said that Carnival deemed the changes to the Triumph so sweeping that it necessitated the name change. The same happened with the Carnival Destiny in 2013, when it became the Carnival Sunshine, and the same will happen to the third in the class, the Victory, which becomes the Carnival Radiance next year.

The name change was punctuated by a ceremony where Kelly Arison, daughter of Carnival Corp. chairman Micky Arison, served as godmother.

In morphing from the Triumph to the Sunrise, the ship has lost most of its original design scheme. There are a few, small touches that might please fans of Carnival’s longtime interior architect Joe Farcus. But in the main, the Sunrise is all modern Carnival.

On my initial walk-through, I found myself thinking with some surprise that the ship will be 20 years old this year.

Speaking of age: In a twist that might surprise some (but not anyone closely connected with the cruise industry), what was once one of the world’s largest cruise ships is now comfortably midsized, even cozy. Twenty years ago, ships of 100,000-gross tons were a new concept. Today, vessels of 150,000 gross tons are the norm.

To echo a comment from Duffy, however, Carnival is able to comfortably fit many of the line’s most popular options onto the Sunrise.

The ship now has a busy waterpark, for example, with a splash pad for youngsters and two big, fast slides (racing among friends was common). Carnival also removed a deck from its main theater and renamed it the Liquid Lounge, and the result is an intimate, flexible space. The Java Blue coffee and pastry shop is now in the atrium.

As far as food choices go, there are plenty. Guy Fieri’s Pig & Anchor Bar-B-Queue Smokehouse is positioned up on a top deck portside, a little out of the way but well worth seeking out for lunch. I missed trying the Seafood Shack by the aft pool and Bonsai Sushi, which looked and smelled tempting every time I walked by (it is in a pass-through between the Sunrise Casino and the Alchemy and RedFrog lounges.

Unsurprisingly, the Pizzeria del Capitano 24-hour station was busy. One fun option of the Carnival Hub app is the ability to order a $5 pizza for delivery anywhere on the ship. It’s a nice way to satisfy picky kids while the parents are eating something more adventurous.

And the Lido cafe has a new light, bright look; the buffet for a casual dinner is a pleasant choice.

The Sunrise is operating out of New York for the summer, sailing four-day Bermuda, seven-day Canada/New England and eight-day Caribbean cruises.