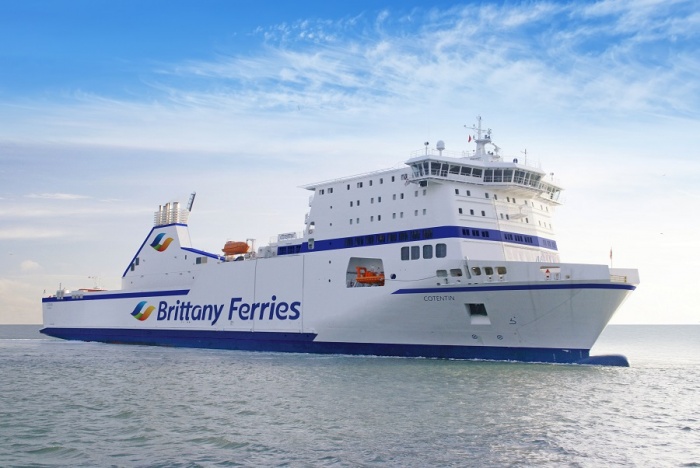 After nearly eight years in the Baltic, Cotentin has made a return to the Brittany Ferries fleet.

The ship has returned to the route for which she was originally built in 2007, carrying freight from Poole in Dorset to Cherbourg in Normandy.

Cotentin becomes the biggest freighter linking the UK with France.

Specifically designed for the transport of freight vehicles, the ship’s 2,210 lane metres can carry 120 lorries, with a cabin berth available for every driver.

The ship flies the French flag, is registered in Cherbourg, and crewed entirely by French seafarers.

The return of Cotentin is important for two reasons.

Firstly, it strengthens Brittany Ferries’ fleet offering, adding freight capacity and preparing for the launch of a multi-modal rail project linking Cherbourg with Bayonne, scheduled for 2022.

A strong fleet offering is key to the company’s plan to emerge from the darkness of the current crisis, and Cotentin’s return follows the launch of its brand-new vessel Galicia in December.

More immediately however, Cotentin is assisting the UK as it emerges at the end of the Brexit transition period.

She operates as part of a contract secured by Brittany Ferries with the UK government’s Department for Transport (DfT) to support the smooth transit of essential freight beyond short sea routes.

The contract guarantees space on two Brittany Ferries routes, for goods like medical supplies leaving the European Union destined for the UK.

In addition to Cotentin operating from Poole to Cherbourg, the contracts guarantee freight space for the UK government on the service connecting Portsmouth to Le Havre.

“We are delighted to welcome Cotentin back to the fleet,” commented Brittany Ferries chief executive, Christophe Mathieu.

“Having the right mix of vessels for our fleet gives us a fighting chance of emerging from the current crisis in good health.

“She returns as we operate services on two routes under a new UK government contract, the third such contract we will have won to provide support.

“These contracts underline the value of a rich western Channel route network, beyond the Dover Straits, to passengers, freight companies, governments and the regions we serve.”