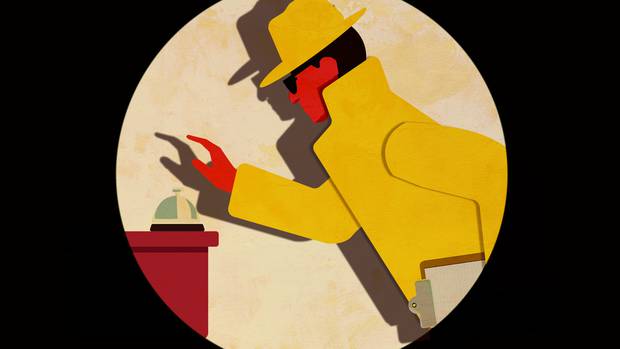 Being told that you’re “due an inspection” used to be a phrase delivered like the premise of a murder mystery novel. Hotel managers and staff would be set on edge – double guessing the intentions of every difficult guest and dodgy moustache as a disguise.

Thankfully, the “mystery shopper” – the practice of sending a hotel inspector to pose as a member of the public – has fallen out of fashion.

When an inspector calls today, what they look like, and more importantly what they are looking for is far less Fawlty Towers. So says Gregg Anderson, general manager of Qualmark New Zealand.

“We have done them in the past, but for five-star hotels – we want to be able to see everything.

“Annual inspections are agreed upon. We arrive announced and we spend all day onsite with assessments,” he explains.

“How else would you know how many hotels have honey-producing beehives on their roof? Or, biodegradable mattresses?”

For the national ratings body, what hotels are doing behind the scenes has become as important as the customer experience. Particularly with respect to sustainability.

“We do have a fairly extensive hotel inspection criteria,” says Anderson but this is less about obsessing over linen thread-count or pillow menus. “Increasingly, life-cycle is important – sourcing of the materials as well as what happens to discarded bedding and mattresses.”

The current top grade of “five-stars, gold” is broad enough to span from heritage, Art Deco hotels such as Auckland’s Hotel Grand Windsor to the fresh, penthouse-style of the Sofitel Queenstown.

However, to achieve this rating, hotels must serve both guest and environment.

Whereas a five-star rating might mean something different to the hotels particuliers of ATOUT France, in New Zealand it translates to accommodation that is going to look after guests as well as the pristine locations they are visiting.

In the centre of Auckland’s CBD, one hotel is bringing the green revolution to the centre of New Zealand’s largest city. The Hotel Britomart is a 104-room hotel preparing to open in October this year. With no inbound tourists and limited occupancy from domestic travellers, the building is launching into difficult conditions. However, the Britomart is not fazed. It’s taken the long-view approach to sustainability. The brick-clad tower is at the heart of a 15-year rejuvenation project of the inner-city space. Each of the 150,000 individual bricks have been handmade and – like the reclaimed kauri timbers and other building materials – are designed for long lifespan and something that has earned it top honours from the New Zealand Green Building Council. 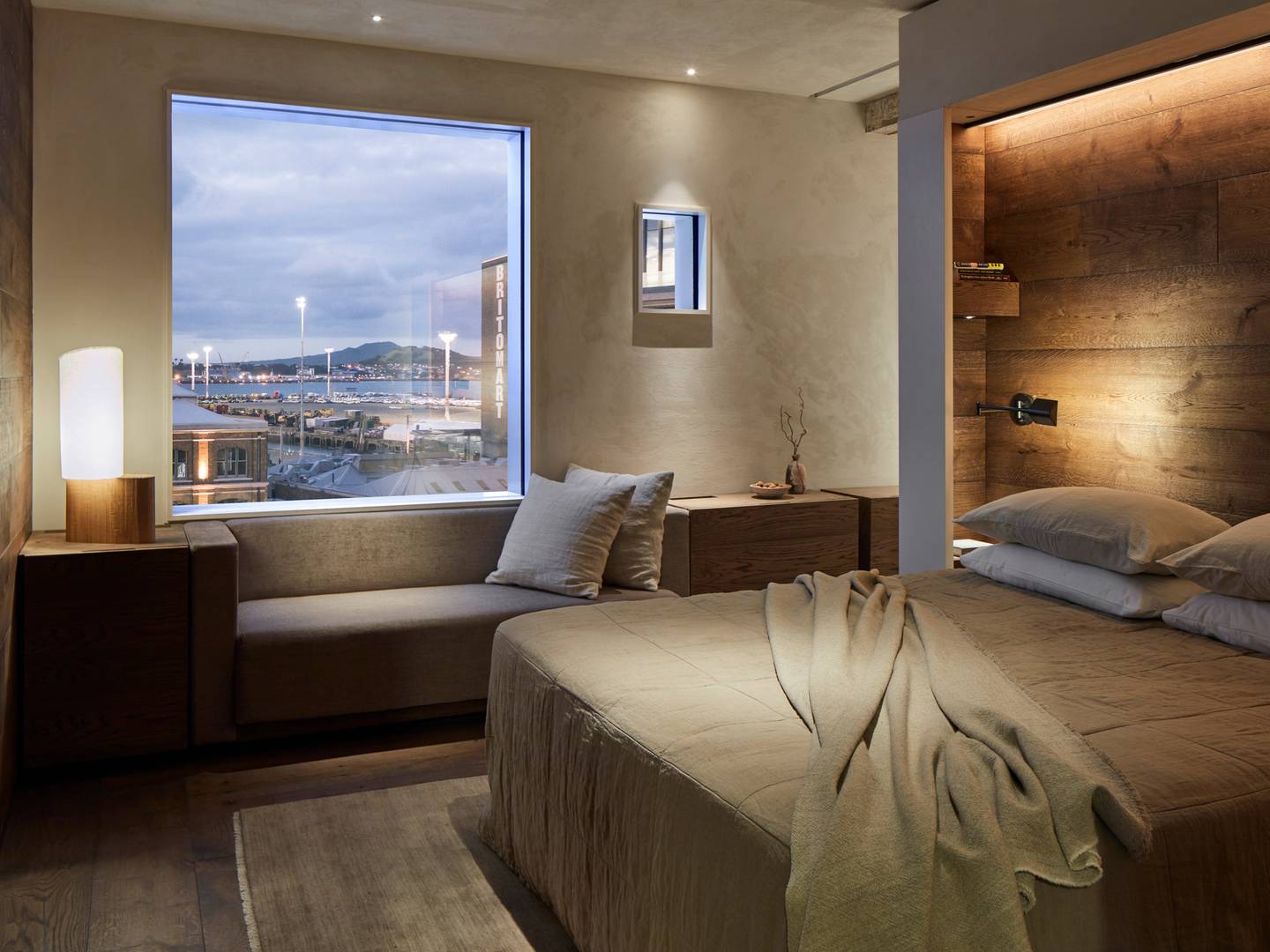 Repurposing materials from the site to fit in with its 100-year-old neighbours, the Hotel Britomart intends to be around for just as long.

It is not by accident that the hotel has been built on top of the city’s public transport hub. It’s possible to reach every part of the city by train bus or ferry, including the airport, within 75 minutes. At the centre of the city’s expansive cycle network, the Britomart will also be lending bikes to guests. With scope for public use, it might become a hub at the centre of the spokes of the Auckland’s commuter cyclists.

The Park Hyatt Waterfront is another Auckland hotel opening this year.

The five-star, 195-room building is slated to welcome its first guests in September and will be on the sidelines of the America’s Cup Village. It’s in one of the city’s fastest-changing districts, but the Park Hyatt has taken care to preserve the area’s links to Waitematā Harbour.

It is designed by architects AR+D in Singapore and Conran + Partners in Hong Kong and the global hotel chain was mindful that it wanted to preserve the local culture and values. The sustainability approach had a strong “cultural” element. Designed to reflect a wharenui meeting house, the hotel wanted to make sure that guests were engaged with authentic, local culture and that Māori artists and businesses were involved in the design. 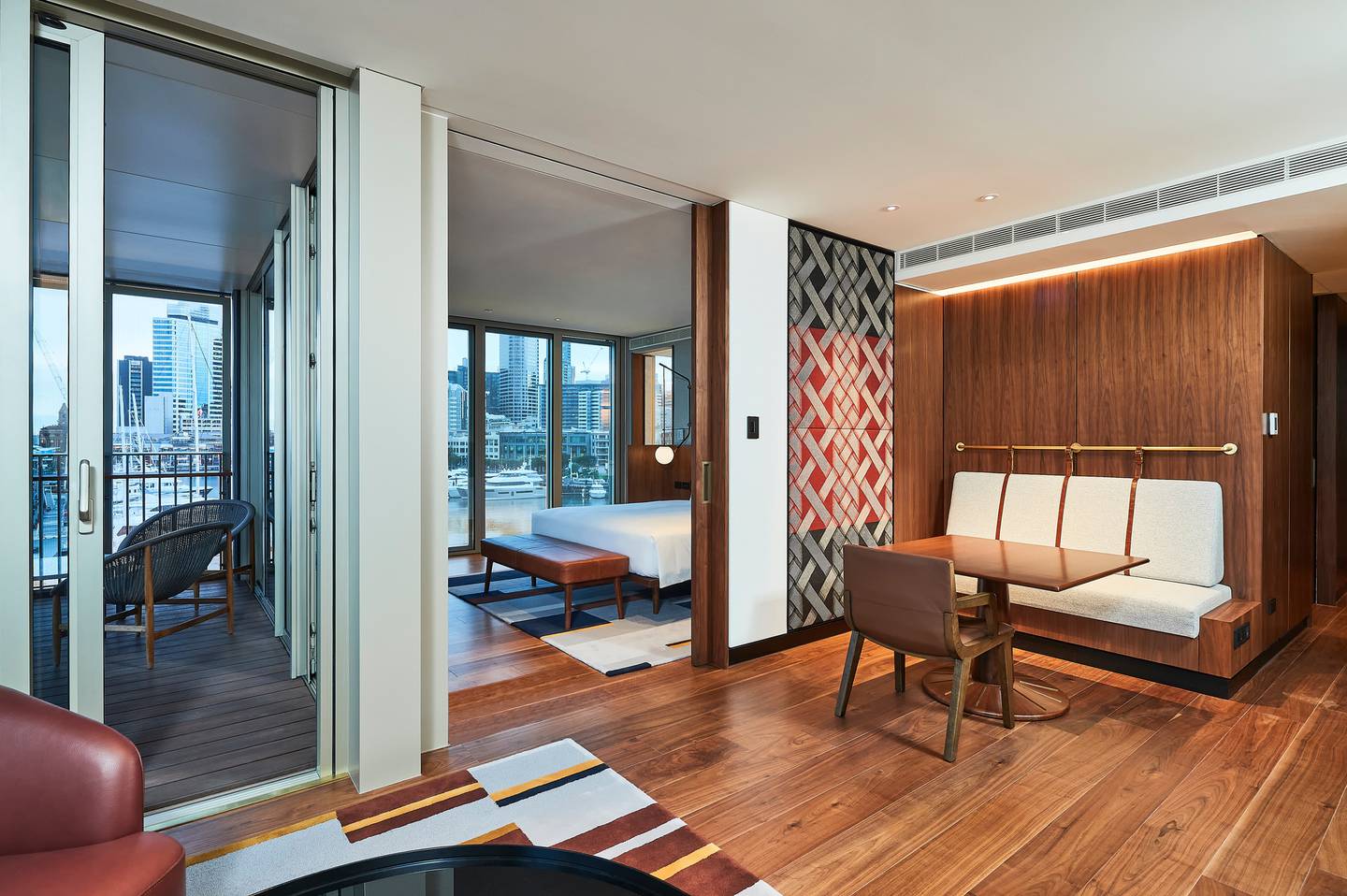 Working with the local iwi, the hotel has commissioned huge, original works by Peata Larkin and woven tukutuku panels created by artist Beronia Scott and her whānau from the Ngāti Whātua Ōrākei.

It’s something that has helped “sense of place” for the new building, says the Hotel’s GM Brett Sweetman, which “would only be possible if we worked hand in hand with the local iwi.”

On the side of Lake Wānaka, the Edgewater has been an excellent student of sustainability.

The hotel’s Weka programme passes sustainability tests with flying colours. With the help of local company the Soap Kitchen, they recycle unused toiletries and have started turning plastic waste and non-recyclable waste into armature for reinforcing concrete.

However, it’s the hotel’s focus on staff training, upskilling and counselling where extra credit is due. 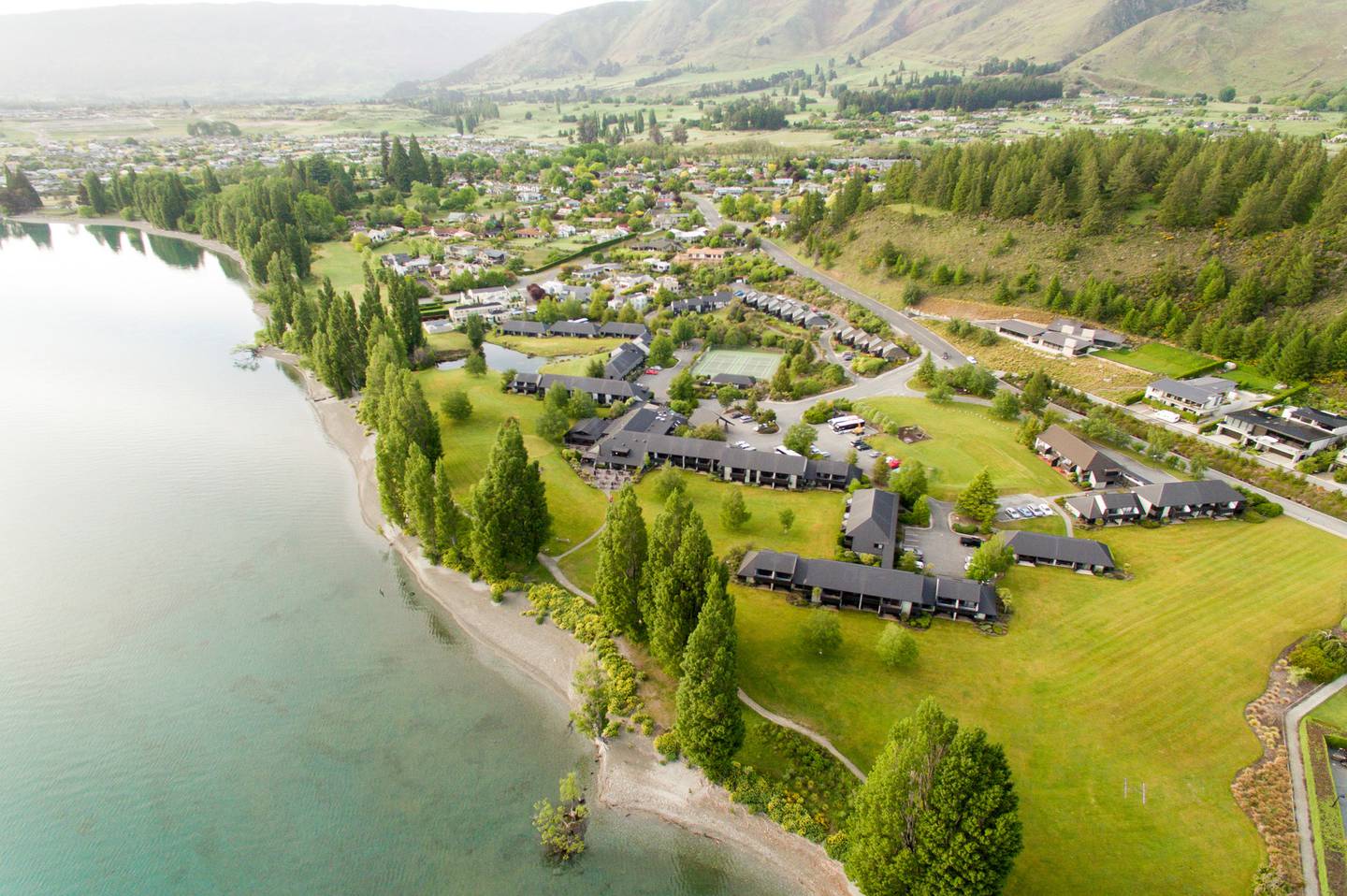 The hotel offers staff the chance to work towards NZQA certificates and other industry qualifications on the job. These include opportunities to sit courses in business management and marketing. Offering paid placements for students at local education centres such as the Queenstown Resort College, the Edgewater is keen to pass on the knowledge and practices of sustainable tourism to future generations.

Sudima Hotels, a homegrown chain of New Zealand properties, will add new hotels in Queenstown and Auckland to its portfolio next year. Their mission is to offer the country’s “most accessible and environmentally friendly hotels”.

It’s an approach they follow down to the minutiae of the microfibres used in pillows and bed linen. Made by Kiwi bedding company Vendella, each pillow is made from the recycled plastic of 22 bottles. Which are surprisingly comfortable.

There is an in-house sustainability team for each property, responsible for finding suppliers that share Sudima’s sustainability goals. Through many small steps they have managed to make big changes, such as Sudima Christchurch reducing laundry water usage by 78 per cent. Every little adds up.

As CEO Sudesh Jhunjhnuwala explained, the hotel chain’s motto encourages workers and guests to “leave the world in a better position than you found it”.

The 160-year-old Wains Hotel building on Princes St is the oldest in Dunedin, possibly New Zealand.

The Italianate fronted-building supplies plenty of character and – surprisingly – a lot of benefits for sustainably minded hoteliers too. The Fable Group, which has been restoring the property since 2018, has been able to reuse long-lifespan materials from the original hotel. “The buildings of the era tend to last,” explains Chris Dickinson GM for the Fable Group. “People don’t use those materials today because it’s just so much more expensive.” 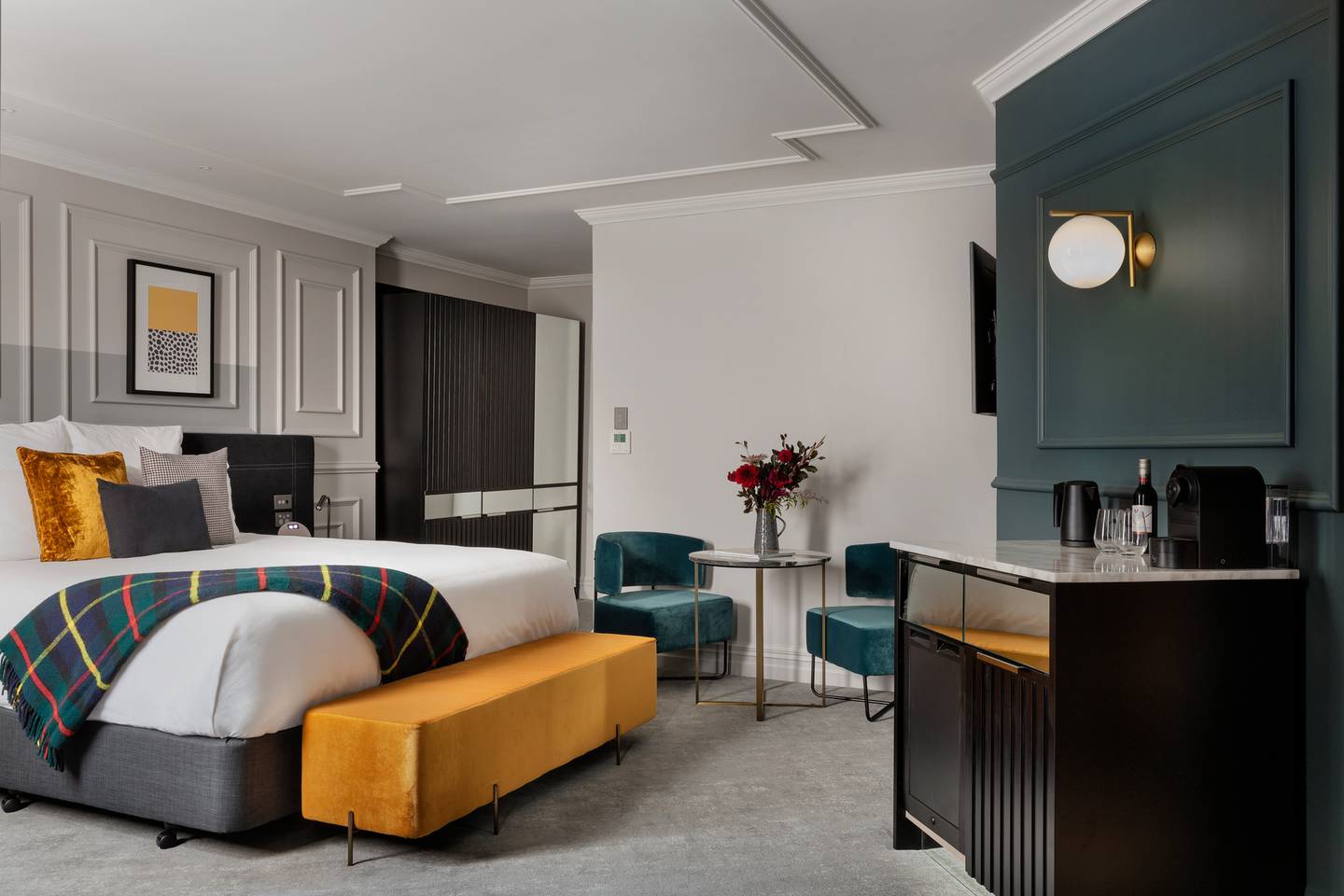 The listed building’s floor plan has plenty of space with 50, generously sized rooms.
However, there are challenges in bringing the classic old hotel up to date. It has been a fine balancing act to get insulation and energy-efficient lighting and appliances while still maintaining the character.”It’s more what the guest doesn’t see, that makes the difference,” says Dickinson.

Having said that, there are some notable tech “upgrades” that are hard to ignore.
Check-in, in-room menus and guest information are now paperless. Printed material has been replaced by iPads, which also can be used to contact reception and updated instantly. Plastic key cards have also been replaced by pulped recycle wood version or a contact-free phone app.

In the next two years there are 13 planned properties, including two in Auckland, with the Fitzroy by Fable in Ponsonby opening in September and the Fable Stay opening for March next year in Picton.

Fable Dunedin opens in October with an opening room rate of $350 per night, normally $525.