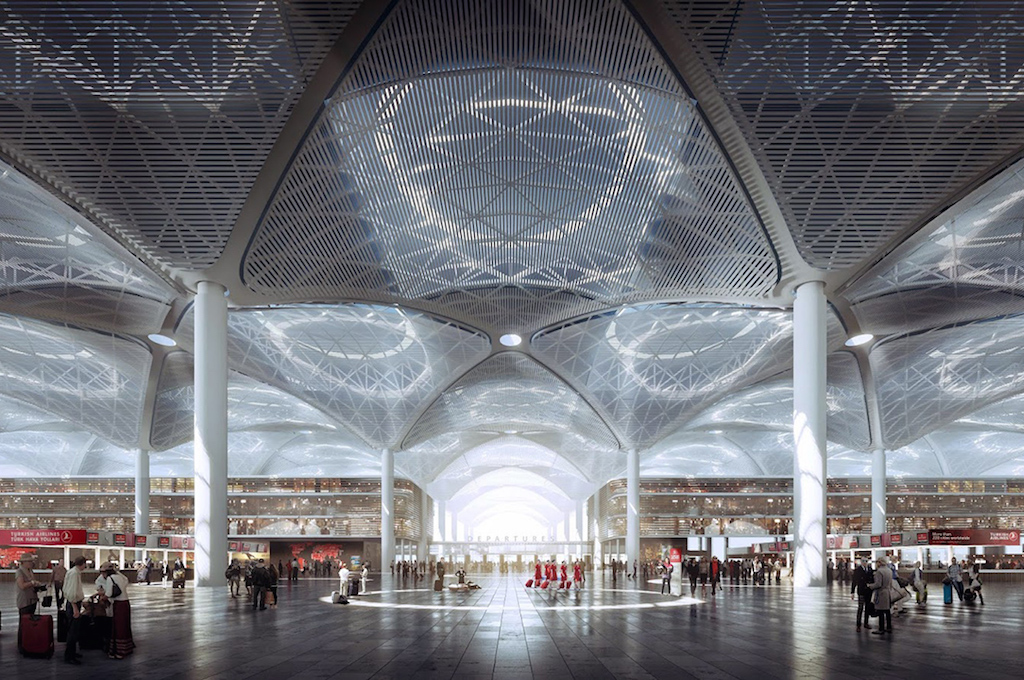 The new Istanbul Grand Airport is scheduled to open in 2019. Haptic Architects

According to the International Congress & Convention Association (ICCA), Istanbul was the eighth busiest convention city in the world last year, up from 46th place at the beginning of the century.

The dramatic increase in convention business in Turkey’s busiest gateway city aligns with the rise of leisure tourism. Istanbul climbed two spots in the 2015 MasterCard Global Destinations Cities Index, surpassing New York and Singapore, to become the fifth most visited city in the world.

Out of the 40 cities listed in the MasterCard Index, Istanbul recorded the highest jump over 2014 at 11.4%. Bangkok and Dubai followed next at around 8%.

“Istanbul has a much higher growth rate than Paris,” reads the report. “If these two cities continue to grow their international visitors’ numbers at the current rates, in four years, Istanbul will overtake Paris to become second ranked in Europe after London.”

However, it remains to be seen if the 2016 ICCA and MasterCard reports coming out this summer will show a somewhat different story due to the multiple bombings over the last year in Istanbul and Ankara.

Either way, Istanbul is preparing for continued growth with the new Istanbul Grand Airport opening in 2019, equipped to handle north of 150 million passengers per year. That’s more than double what airports like London Heathrow and Dubai International are processing now on an annual basis.

To support the increased traffic from the airport, Istanbul is presently undergoing massive road and rail infrastructure expansions, including a new bridge and new tunnel crossing over and under the Bosphorous.

Meanwhile, the Istanbul Convention & Visitors Bureau launched its new “Tale of Two Cities” branding last year to promote the city’s contemporary energy as much as its 8,500 years of history linking Europe and Asia.

We spoke with Ozgul Ozkan Yavuz, general manager of the Istanbul CVB, for insight into the bureau’s marketing efforts, the city’s infrastructure upgrades, and her thoughts about how the socio-political unrest polarizing Europe is impacting one of the world’s most multicultural cities.

Skift: How has Istanbul managed to climb the ICCA rankings so dramatically over the last decade?

Ozgul Ozkan Yavuz: Istanbul and Turkey have generally changed a lot in the last 10 years, and we have started to take advantage of that potential more than ever. First, there were huge investments in terms of infrastructure for conventions. We had two new convention centers open, one in 2008 and a second one in 2009, and after that we started to host quite huge conferences. And thanks to Turkish Airlines, Istanbul is connected today with 280 destinations directly, and that increased connectivity contributed a lot to our position as a convention destination. Our hotel capacity has also seen a huge change in 10 years. We have almost 100,000 bed capacity in almost 200 four- and five-star hotels, which are all easily accessible.

So, because of that we have managed to increase the number of conventions 280% in 10 years. Presently, the U.S. is one of the top five convention markets for us in Istanbul.

Skift: Can you provide an update on the status of the new Istanbul Grand Airport and the new bridge and tunnel crossing the Bosphorous?

Ozkan Yavuz: Istanbul Grand Airport is expected to be completed by the end of 2019, when it will provide a capacity of 160 million passengers per year. It will be one of the world’s biggest airports, and the biggest hub in Europe. There are also new roads and new railway lines under construction connecting the airport with the city. We already have two airports, but the third one will change our life seriously because of the growing arrivals.

At the same time, in preparation for the new airport, the government and the local municipality are also investing a lot in transportation projects to improve inter-city connectivity. The third bridge, which is close to the new airport, is about to finish so it will open this year. The Euro-Asia tunnel under the Bosphorus Strait will be finished next year in 2017. It will also bring increased mobility between the two parts of the city, connecting Europe and Asia.

Skift: It’s getting more challenging for major cities to compete based on infrastructure alone, so more CVBs are promoting their intellectual capital and their ability to connect foreign delegates with local advanced industry. Is that something that’s developing in Istanbul, where you’re positioning the city more as a knowledge and high-tech hub?

Ozkan Yavuz: Yes, very much. I think of this phase as the third phase, actually. In the first phase, the cities are marketing themselves with their history and heritage, including the convention market. We say to planners, “If you bring your conventions here, the number of your delegates tends to increase,” because people want to see Istanbul as a destination, the culture and everything. The second phase is the infrastructure developments, many of which we have already accomplished. The third phase will definitely be the knowledge capacity of the city. Since last year, we started to promote more of this because today we have 53 universities in the city. We also have 5 techno-parks, and a sixth techno-park is about to start construction.

Skift: What is a techno-park?

Ozkan Yavuz: It’s like your Silicon Valley, an innovation hub . One video technology park is also about to open, and we have almost 663,000 higher education students and 28,000 professors. So Istanbul really is a knowledge hub, drawing almost 60,000 international students from Europe and the Middle East.

The educational institutions are becoming really strong, along with their connections with other international universities. So that’s why Turkey is investing a lot more in ICT (Internet and communications technology). This is one of the areas where Istanbul is growing very quickly and becoming much stronger. According to the Istanbul Development Agency, ICT is becoming really an important source of growth for the local economy in Istanbul.

Skift: How is the CVB attempting to leverage that and promote Istanbul more as a tech hub to convention organizers?

Ozkan Yavuz: Last year, we changed our logo and previous “Historically Dynamic” slogan to the “Tale of Two Cities” campaign. Istanbul is heavily known with regard to its heritage, which is the destiny of cities like Istanbul and Rome. But if you have too much history and too much heritage, it is very difficult to show your contemporary side. With Tale of Two Cities, we are in a way juxtaposing our contemporary side against our heritage side. So we created a new advertisement campaign last year. We organized press trips with the theme of Tale of Two Cities. It worked well. People started to see the universities, the techno-parks, the new convention centers, all of which are very contemporary.

Of course, you cannot change overnight so when people think of Istanbul, they still want to see the mosques, the palaces, the heritage. But what we introduced last year was something definitely new for us. Also there are some events like Innovation Week, for example, where these young people are bringing together their innovations that they’re trying to introduce to investors. This innovation theme is growing throughout Istanbul and I’m really proud of that, for the younger generation.

Skift: Regarding the attacks over the last year in France, Belgium and Turkey, what are you hearing from international planners who are concerned about security?

Ozkan Yavuz: It’s affecting the travel industry and the conventions industry a lot. We had some cancellations, both from the association market and from corporate sides. We had cancellations surely. Like Paris and Brussels, who have also had cancellations, it is inevitable. Although the security forces are trying to increase the security, with more police and more security measures around the event spaces even, it is not always possible to stop terrorism. This is a global threat. You don’t know when something will happen, what will happen, and where it will happen. If everywhere is not safe, nowhere is safe. We will either all be safe, or we will…. I don’t know, they are calling it the “new normal.” How can it be normal? I don’t know, but surely it will be a difficulty upon our industry and for all European destinations.

Skift: Is there anything that CVBs can do to offer assurances about security, or is it just better to show solidarity and support for those regions impacted?

Ozkan Yavuz: No one can say that they are 100% secure. Of course, everybody is increasing their security measures. The police are everywhere, and half of them are uniformed, half of them are walking around like normal people, because we do not want to frighten people. But no one can say, “I am secure,” because really, we don’t know what will happen tomorrow anywhere in the world.