MSC Seashore floats out in Italy 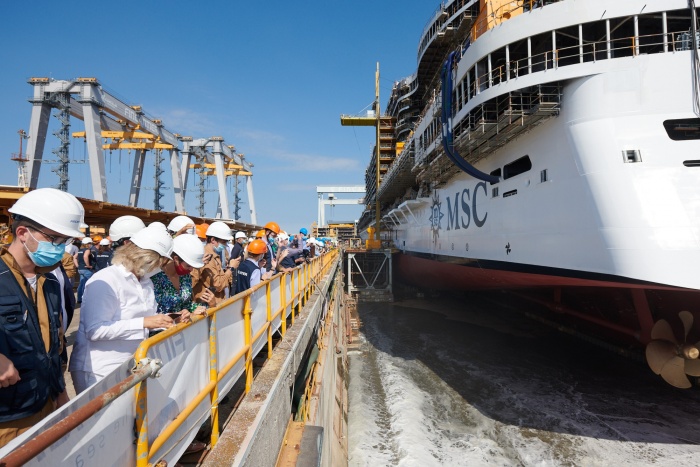 Park Resorts offer great value UK caravan park holidays from as little as £69
Enjoy your Vegas vocation with Caesars.com
Travelodge: Search and book 500 hotels throughout the UK and Ireland
Cheap Holiday Deals 2016 - Book Holidays with On the Beach
View the Macdonald collection of luxury hotels, resorts and spa hotels in some of the finest UK locations
Plan your trip with CheapTickets. Buy airline tickets, read reviews & reserve a hotel

The float out of MSC Seashore took place earlier at the Fincantieri shipyard in Monfalcone, Italy.

This is a major milestone in ship building as it is the first time a new vessel touches water and sees the ship enter the next phase of construction.

MSC Seashore, which will be the longest ship in the fleet, at 339 metres, has now been moved to a wet dock until her delivery in July to allow for work on her interior.

Pierfrancesco Vago, executive chairman, MSC Cruises, said: “We are committed to our new builds programme, which with each new class of ships sees us innovating and setting new standards in the industry.

“MSC Seashore will in fact be the largest and most innovative cruise vessel ever built in Italy.

“She will also be one of two new ships for which we will receive delivery in 2021 thus underlying our belief in the long-term growth prospects of the sector – as also demonstrated by the return to service of our first ship earlier this week.”

The vessel will become the third of a total of four in MSC Cruises’ Seaside class, following MSC Seaside and MSC Seaview, which launched in 2017 and 2018, respectively.

She is the first of two enriched Seaside Evo ships with newly designed public spaces, more cabins and the highest ratio of outdoor space per guest of any ship in the fleet.

More than 65 per cent of the ship has been enhanced to make MSC Seashore a significant evolution of her sister ships.

Giuseppe Bono, chief executive, Fincantieri, commented: “The float out has always been one of the most satisfying moments for those involved in the construction of a ship.

“It is also the occasion to further strengthen everyone’s commitment, because when the ship touches the sea a lot of work has already been done, but much more still lies ahead.”

He added: “The uncertain situation that we are experiencing worldwide adds even more important value to this day, which bodes well not only for MSC Cruises and for our company, but for the entire cruise industry.”