Planes, trains and Airbnb: The most unusual stays around New Zealand 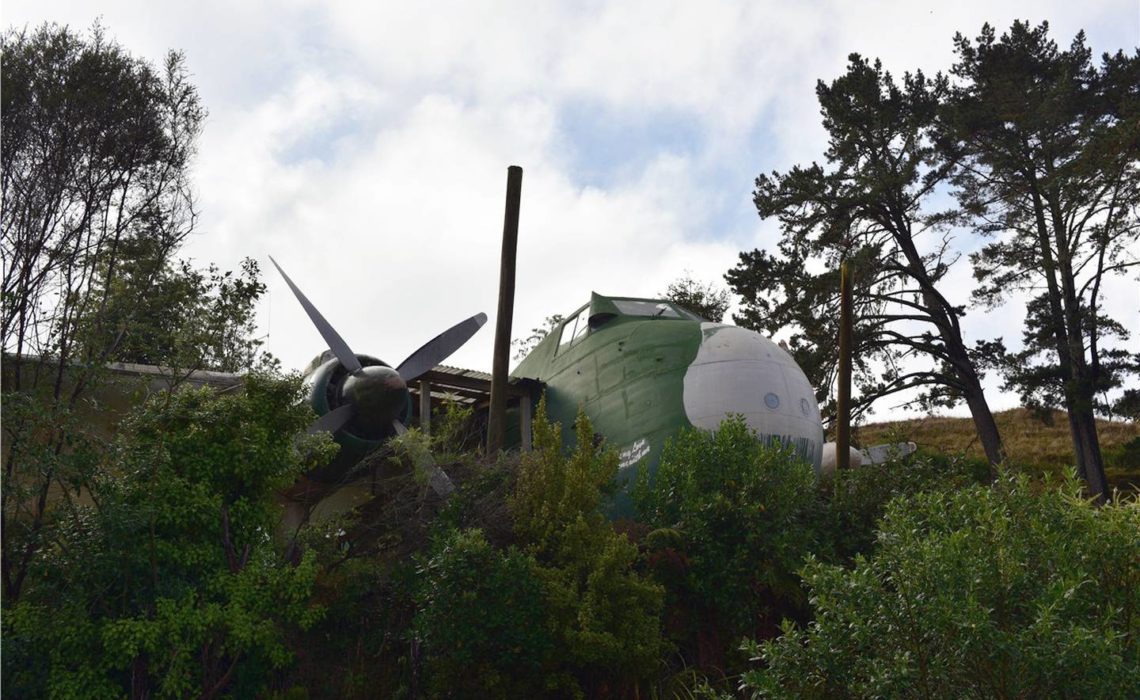 On a recent family trip to Rotorua we opted to stay in an Airbnb, owned by a man simply known to us as Des. Every surface was adorned by a trophy or plaque, an eccentric collection of antique clocks congregated behind the couch and in the kids’ room, to their utter delight, every inch of wall was covered in coloured posters. Each poster commemorated a cycling road race, dating back to the 1960s, hosted everywhere from Mexico to Japan. Whose memories were these, we wondered? Closer investigation revealed that our host had been a very successful competitive cyclist, representing New Zealand in several Olympic Games and winning a Commonwealth Games medal. We were all impressed. My son even dubbed our new digs “the awesome house”.

The personal aspect of renting from a private owner, rather than a hotel or motel, can enhance your trip. Your private accommodation choice, no matter how “normal” it may seem in the photos is always going to be stamped with the personality, taste and history of whomever you rent it from. Some Airbnb hosts are satisfied with leaving their mark on their property with a scattering of colourful cushions, or perhaps some wall art, while others go all out, designing an accommodation option that stands out, in every sense of the word. Here are some of the most memorable, unique and quirky Airbnb rentals in New Zealand. 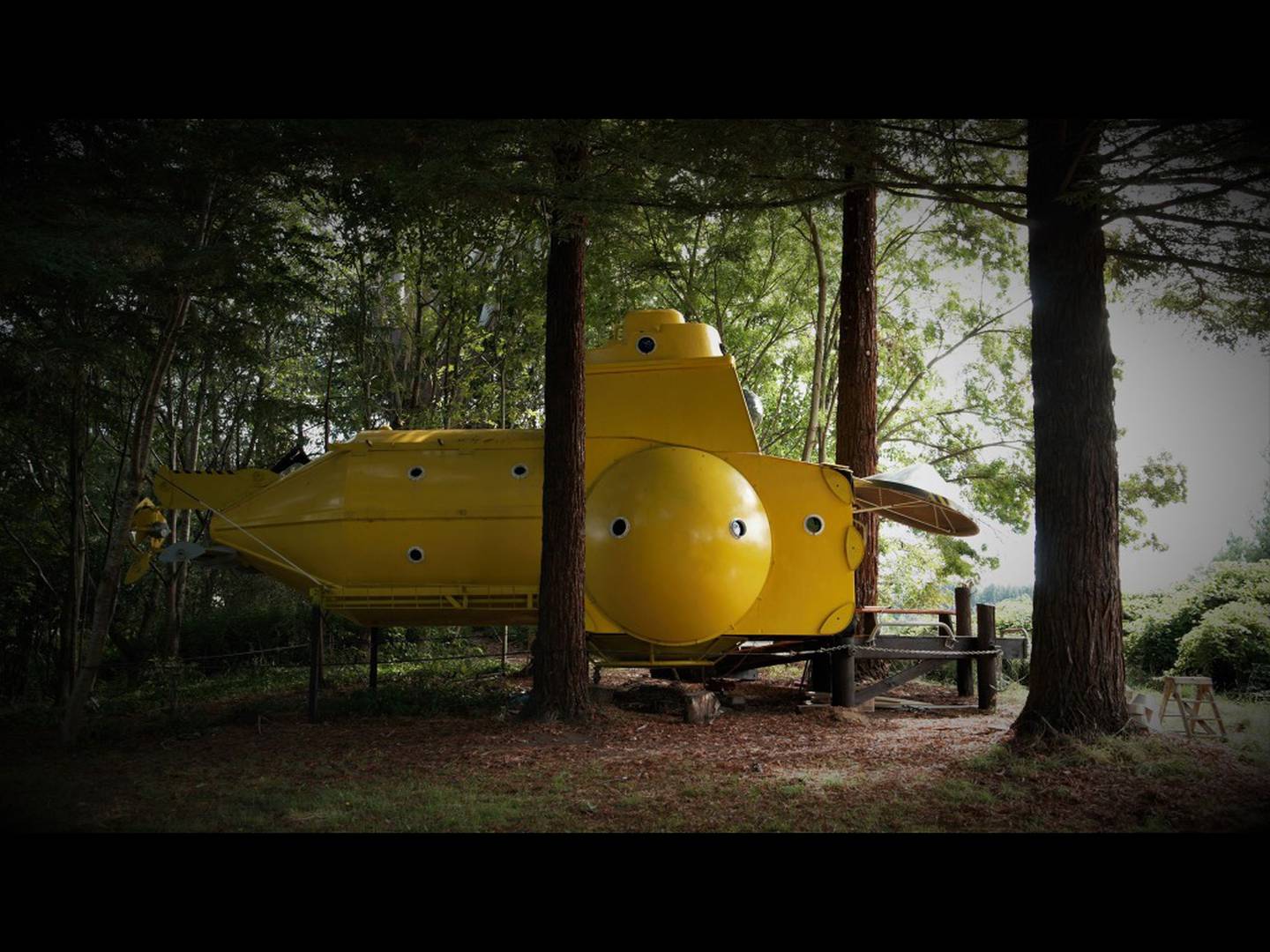 If you want to have the lyrics, “we all live in a yellow submarine”, on repeat in your head for days then this custom-built tiny house is for you. Nestled among redwoods on a secluded property seven minutes from the village of Marton, the dwelling was custom built using an old grain silo, spa bath and even parts from a milking shed. The submarine sleeps four, albeit in close quarters, with two double beds in bunk formation. Entry to the sub is via a bulkhead, opening into a steampunk-themed sitting area. The accommodation also features a small kitchenette, bathroom, deck and guests can climb to the top of the sub and take turns as captain. Aimed at fun, rather than comfort, the house is not suitable for children under the age of 2, there is no minimum stay period and cost per night begins at $149. 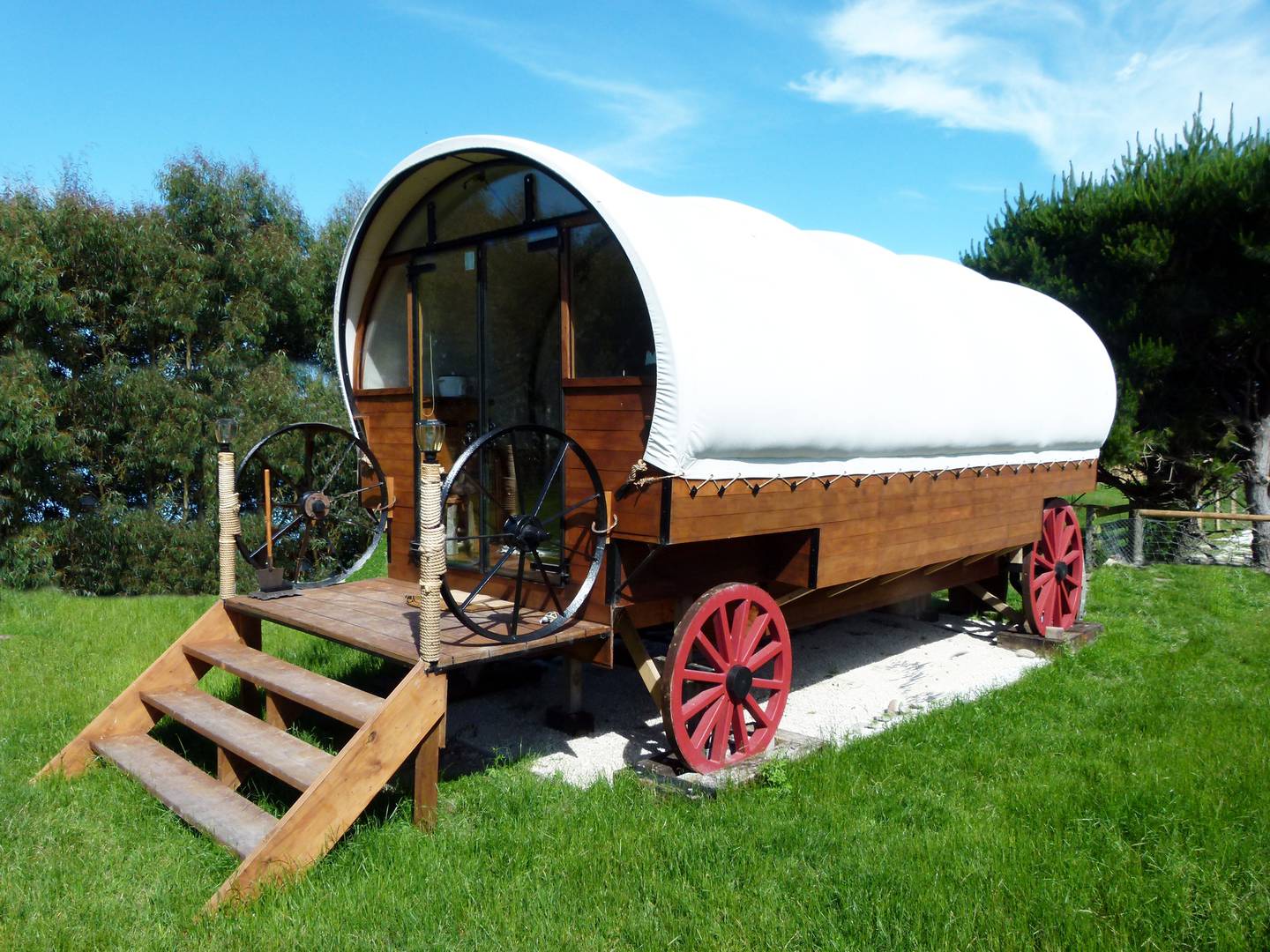 Found just 4km from Kaikōura town centre is this colonial-themed stay. Consisting of two separate dwellings, the main wagon features a king bed, kitchen and bathroom, while the second features a set of bunk beds only, so you can get a little distance from your kids or traveling companions if you wish. The separateness of the sleeping arrangements may not suit all guests but this inconvenience may be offset by the stunning mountain views, the offer of embarking on a llama tour (a service offered by the hosts), the outdoor hot tub, gas-fired pizza oven and freedom to explore the property and commune with nature. Whilst describing itself as a glamping experience, the wagon is well insulated and even boasts a TV. There is no minimum stay period and cost per night begins at $229. 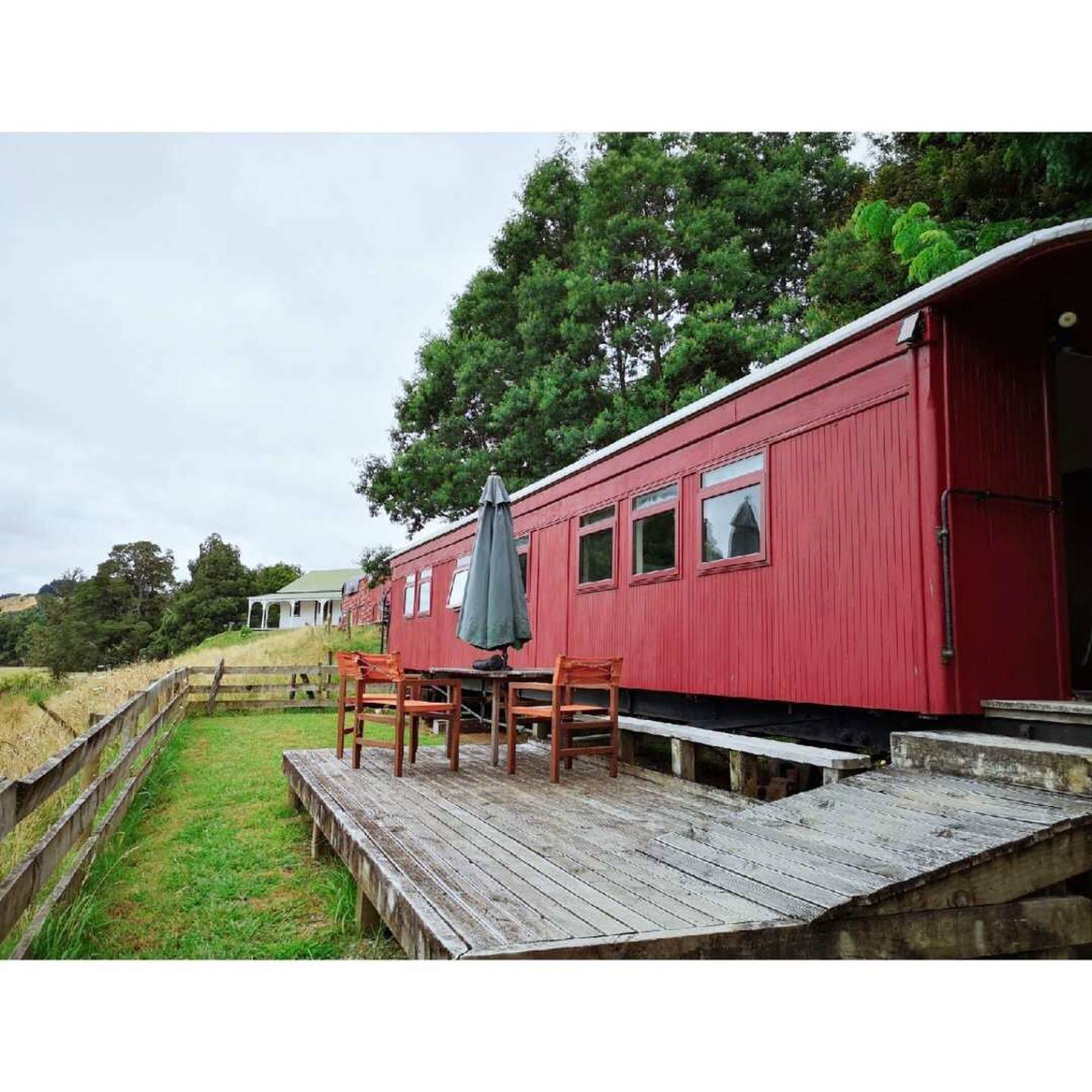 Sitting on one large site, Woodlyn Park, accompanied by other similarly unique dwellings (see below) is this converted train carriage. Located very close to Waitomo caves, The Waitomo Express is an actual train carriage dating back to 1918 that has been kitted out to host a family in comfort. The train sleeps up to five people, boasting a double bed in the main bedroom and a separate room with a single bed and a bunk bed. There is also a small kitchenette. This stay is very much angled towards families, there is no minimum stay period and cost per night begins at $190. 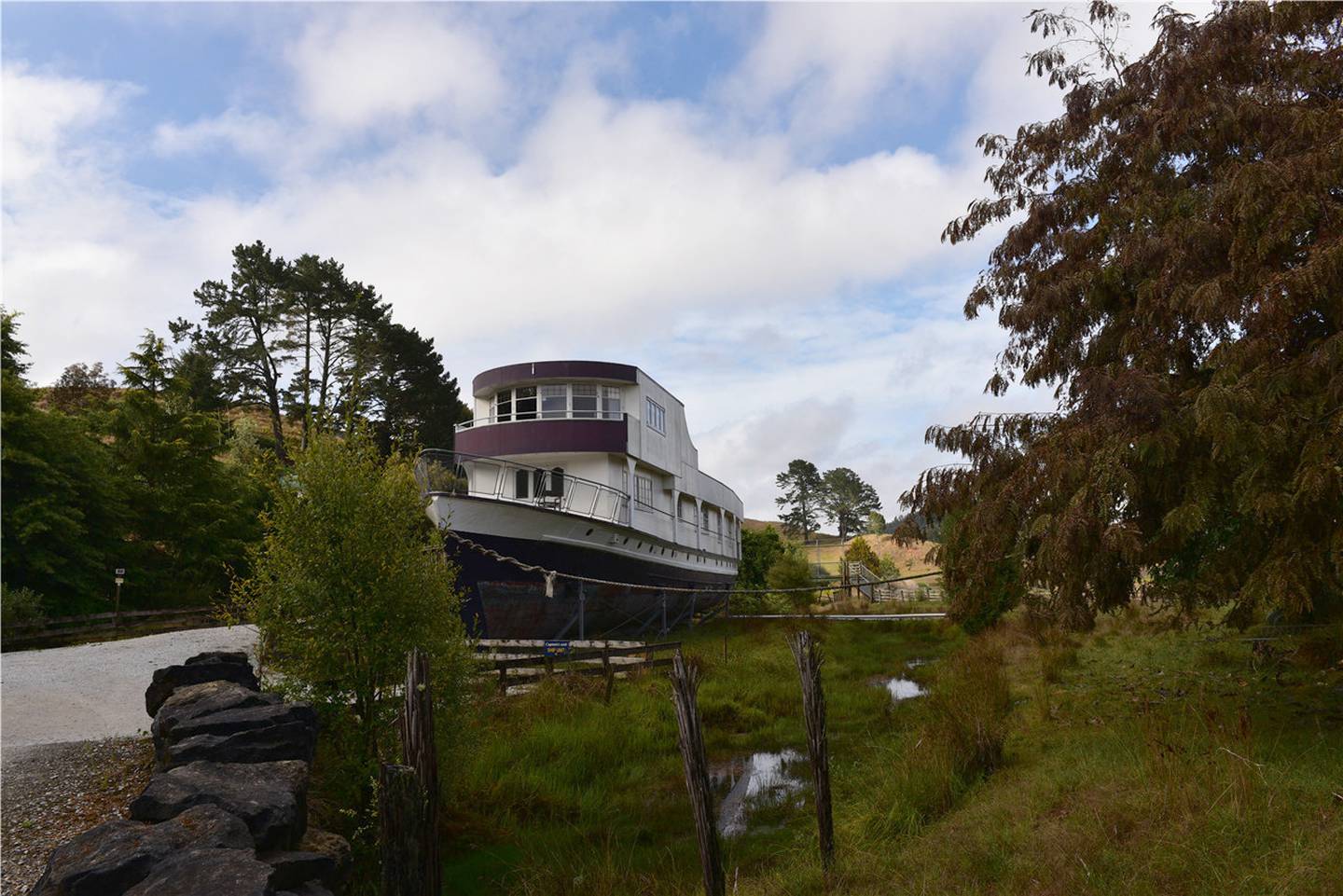 Within a stone’s throw of the aforementioned train, also within Woodlyn Park, sits this former World War II petrol boat that was recovered from Australia and cleverly converted to cater for those looking for a little adventure with their accommodation. Rambling corridors lead to a comfortable living area and well-adorned bedrooms, the main bedroom leads out to its own private deck on the prow of the ship. The ship comfortably sleeps six as, in addition to the main bedroom, there are two more bedrooms featuring two single beds in each. There are three decks, allowing for plenty of exploring, which the kids will love, but also means there are lots of steep stairs, which older people or those with bad knees might not love so much. This stay has no minimum period and cost per night begins at $260. 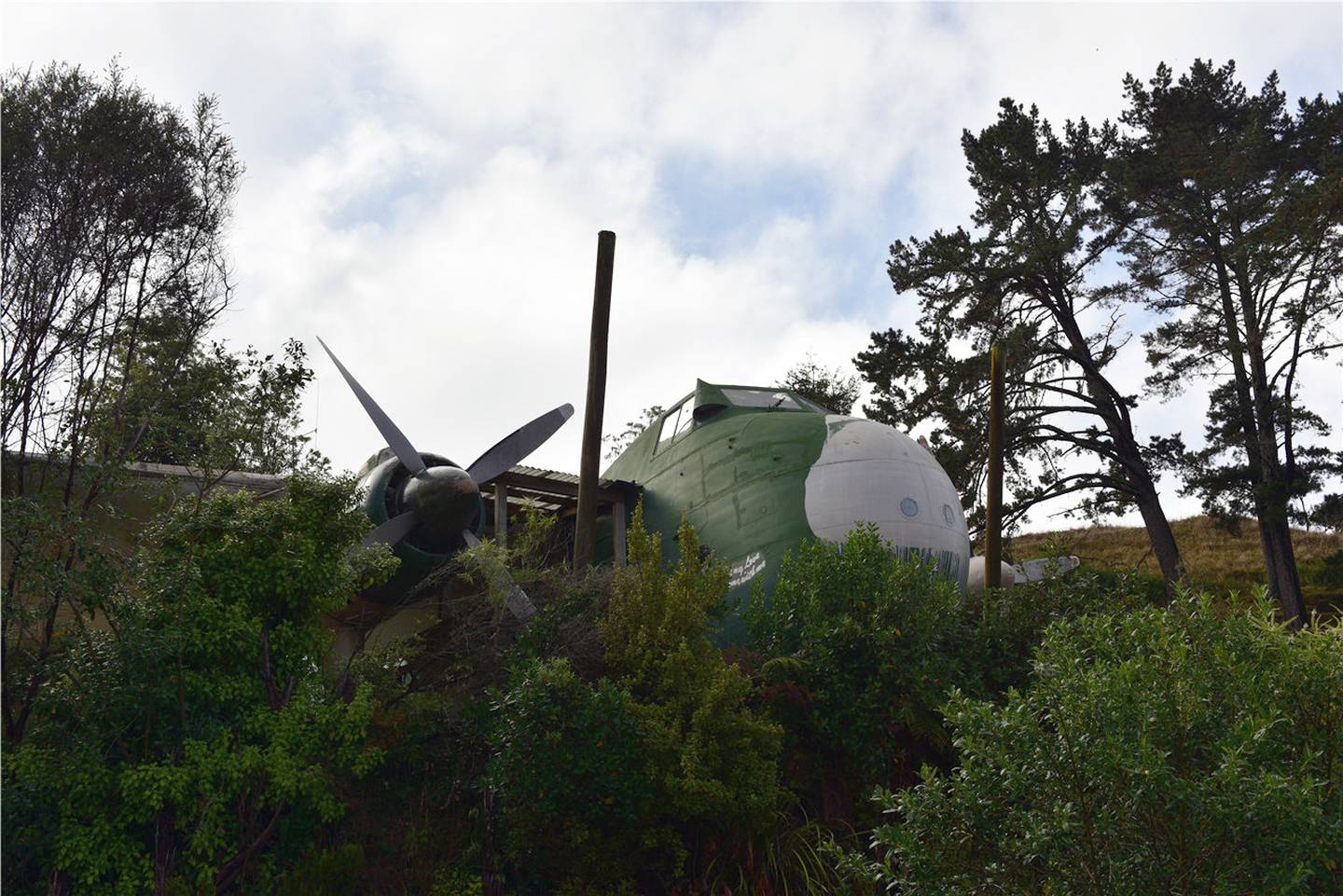 We can’t stop in at Woodlyn Park without mentioning the Vietnam War-era Bristol freighter that has two separate accommodations hidden within. The tail unit sleeps four, with a queen bed in the only bedroom and bunks in the living/common area. The cockpit is decked out as a separate unit, with its own entrance, although guests have mentioned hearing their neighbours in the front and also feeling movement in the plane as other guests moved around. This is another one for the off-beat traveller or those with adventurous younger kids. One night will most likely feel like enough, which is very possible with no minimum stay period and cost per night begins at $180.

This cute, eco-friendly cabin is completely unplugged – no wi-fi, no TV – in a cute, character-filled cabin which sits on 12 hectares of pristine native bush and farm land. The cabin can sleep four, but is really aimed at two, with just one bedroom and a sofa bed in the living room. There is also a fully equipped kitchen, bathroom with a bath and a fireplace for cold nights. And the alpacas? There are several of these charming animals to greet, feed or simply admire around the property. A cosy hammock hangs between two trees next to one of the trickling creeks nearby or get your steps in exploring the many walking tracks, from easy strolls to challenging hikes. This off-grid cabin has no minimum stay period and cost per night begins at $175. 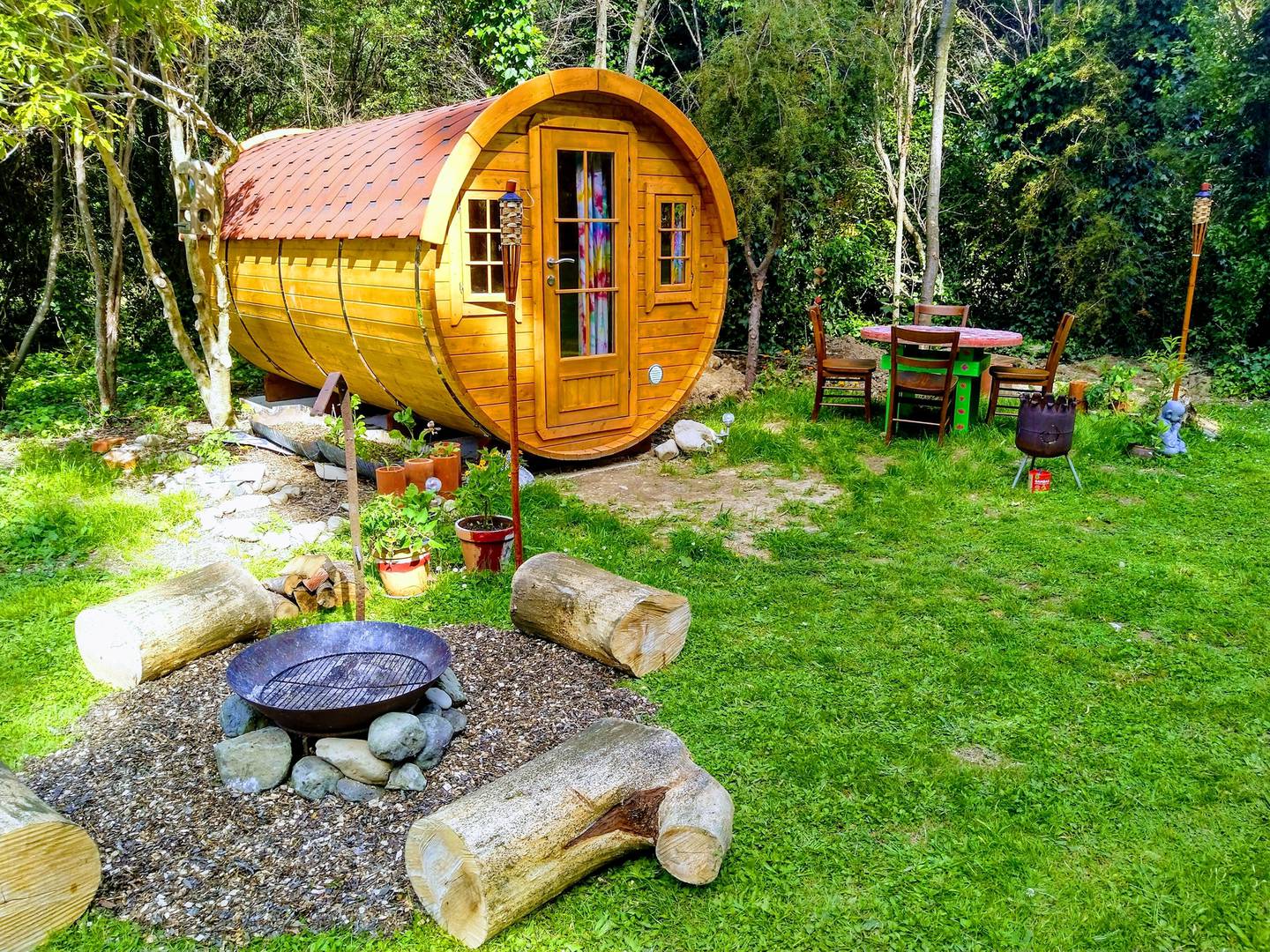 Two round, wooden barrels sit on several hectares of gorgeous property, not far from Nelson. Each cabin sleeps four with a queen bed on the bottom and a king bed above. The beds are in very close proximity so best suited to families. The experience is more akin to “glamping” than self-contained accommodation as there is an outdoor toilet, bathroom and well-appointed kitchen, shared by both cabins. The outdoor fire lends itself to toasted marshmallows and fireside sing-alongs, while in warm weather there is also a little watering hole for swimming. These warm, round cabins have no minimum stay and cost per night begins at $75.