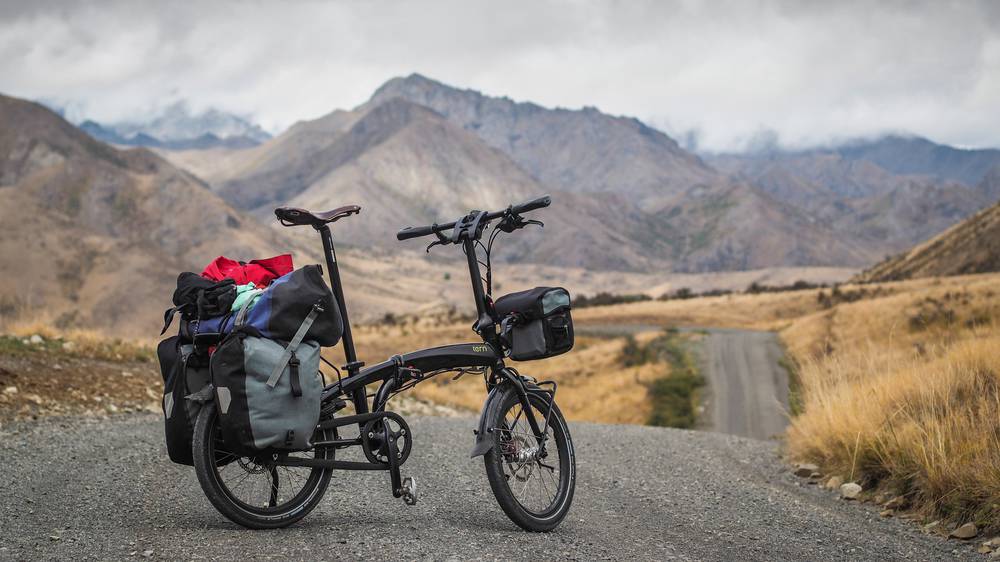 I love exploring our countryside by bicycle, whether it’s a short ride or a multi-day adventure, riding a bike floats my boat. Cycling also allows a person to admire every bird, branch and bloom, while having a modest impact on the environment. With so many great rides to choose from, here’s a small handful of my favourites.

At 87km end to end, the Twin Coast Cycle Trail connects the Bay of Islands with the Hokianga Harbour, from Opua’s pretty little boatyards to historic Horeke. The trail features forest and bush, disused rail lines, a giant lake and century-old rail tunnels. You can easily complete this little gem in two days if you’re super-fast, or do it over three if you want to stop and smell those roses.

The ancient rocks that pock the pastureland bring to mind Aotearoa’s volcanic adolescence while the wobbly suspension bridges strung over babbling waterways are marvels of modern engineering and, in the warmer months, you might like to take your togs. 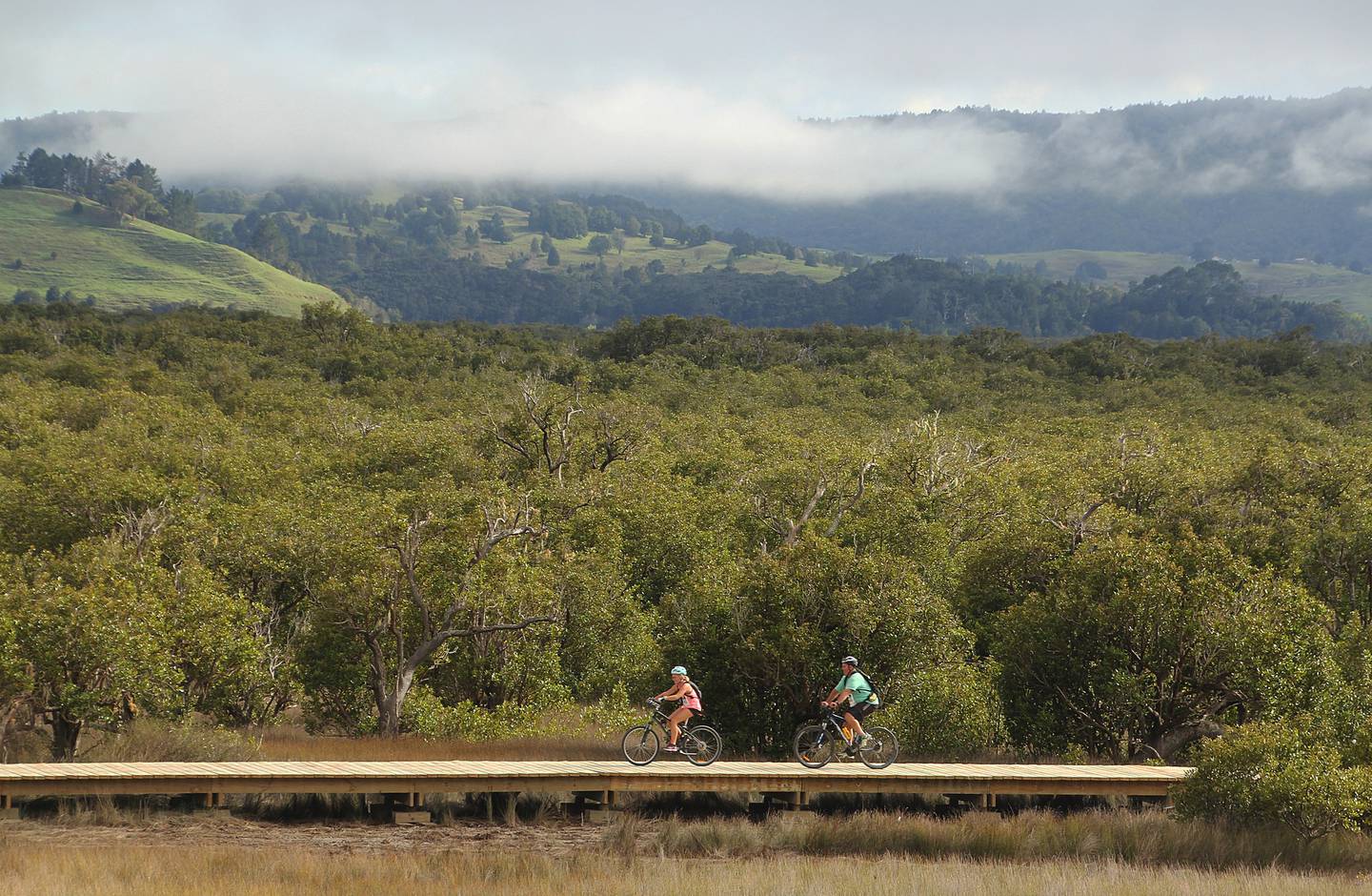 The trail has been constantly evolving since it opened four years ago and there are now many fabulous places to eat and stay, from Kawakawa with its excellent coffee and kai – or to simply spend a penny in those famous Hundertwasser conveniences – to Kaikohe, where the old BNZ has been transformed and is now home to elegant accommodation and a cafe, an absolute labour of love and a gift to the community on the part of the proprietors. Few things beat riding along boardwalks over mangroves into rustic Horeke for a cold drink on a hot day.

Mostly grades 1-2, there’s a short section that’s nominally 2-3, although few riders would feel out of their comfort zone on this trail.

To quote from one interpretation panel seen en route: “There are times when we become breathless and other moments that take our breath away.” The Twin Coast Cycle Trail does both. In fact, I love it so much, I’ve done it five times, so my adulation is authentic and they haven’t seen the last of me either.

I’m from the Waikato, it’s my tūrangawaewae, so when I ride the Waikato River Trails, it feels like home. Covering 107km from the southern end of Karapiro in the north to Ātiamuri Village in the south, this treasure of a trail is a symphony of beautifully groomed paths, boardwalks, and scenic river riding.

Broken into five sections, each one named for its closest lake, the 38.3km of trails at the southern end and the 11.5km at the northern end are graded intermediate while the segment in the middle is advanced.

I’ve ridden various sections over several trips and while I intend to ride the whole thing end to end one day, for now, I can vouch for the section from Arapuni – where I always swing by Rhubarb Cafe when in the vicinity – before pedalling down to the spectacular swing bridge built in 1929 for the workers on the Arapuni hydro dam.

It’s impressive to look at and invigorating to cross, then it’s a chirpy wee cycle to Little Waipa Reserve, before heading back to Arapuni, all easy riding with a few bends and steep patches which pretty much anyone could tackle. 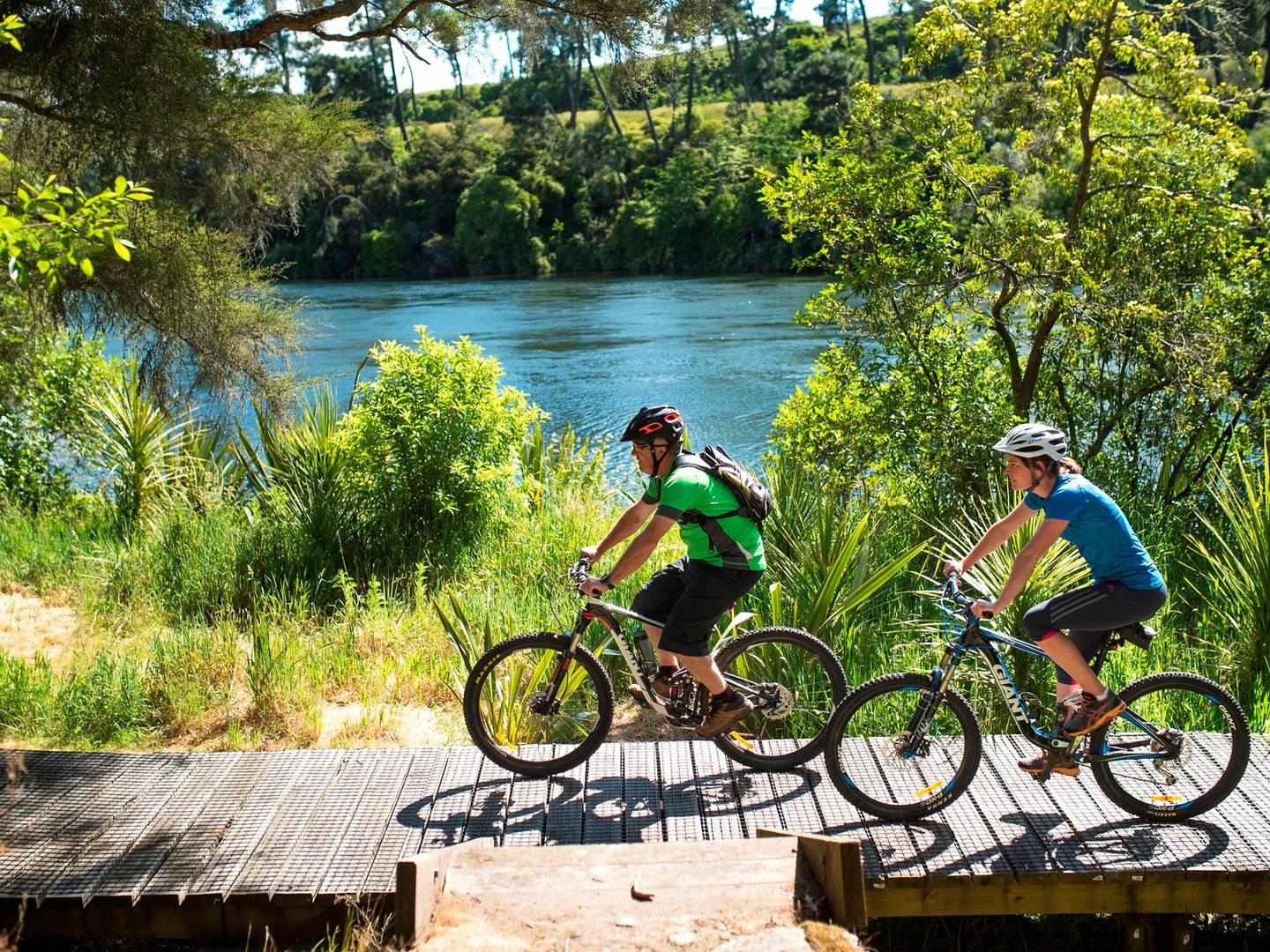 A bit more challenging is the section from Whakamaru Village to Ātiamuri Village, which includes Ātiamuri Dam. This is 25km of intermediate riding that features undulating trails and some sharp turns on everything from clay to gravel, sand to pine needles.

If you’re looking for a picnic spot, my vote goes to picturesque Whakamaru Lake Reserve. Or to make a truly decent go of it, why not start way downriver, ride the relatively new Te Awa River Ride for 70km of grade 2 joy. Set off from Ngāruawāhia and head to Hamilton Gardens, push on to Cambridge, through to Karapiro, then connect up with the Waikato River Trails in Horohoro, which could feasibly provide you with more than 177km of mostly off-road riding.

One of the aptly named Great Rides of The New Zealand Cycle Trail, this 115km darling is chocka with beautiful sights and heritage wonders, including railway relics, covering a variety of stunning landscapes from coastal to forest to riverside.

Graded 2-3, the ride begins at the head of Wellington Harbour and heads out across the Remutaka Ranges, where it funnels through the Wairarapa and back out to Eastbourne. When I rode it, I started at the Petone foreshore before heading inland towards Lower Hutt where, in spite of commerce and a swelling population, the adjacent waterways are home to healthy fish, and I passed small clusters of anglers catching decent-sized kahawai. 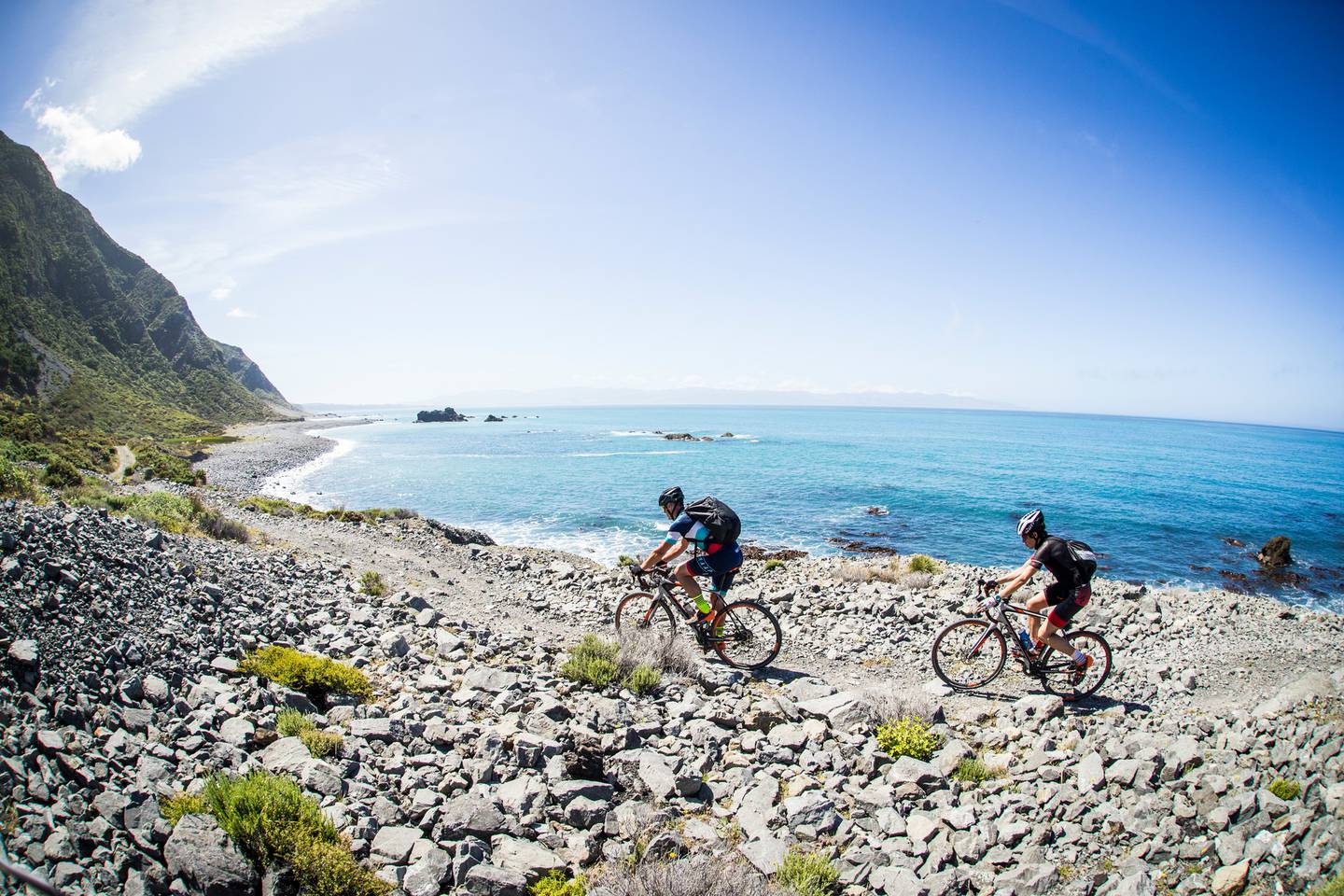 Along the Hutt River I rode, a mighty rock-strewn waterway, and on to Kaitoke Ridge where forestry trails are shared by walkers and horses. Pick a low gear for what was a steady climb, with information panels giving riders regular reasons to stop and catch their breath. And it’s put in perspective how much tougher life would’ve been for the hardy railway families than for 21st-century cyclists.

Railway tunnels make this segment especially interesting and of the five I counted, the longest measured 480m. New Zealand’s oldest truss bridge can also be found here. Once you reach the peak at Summit Station, 348m above sea level, from there it’s mainly downhill and, to my mind, Cross Creek to Wairarapa Moana was one of the highlights, with its bridges and native bush vistas. Then, when the world opened up to reveal a sparkling lake, as big as a small ocean, I felt my heart skip a beat.

I spent a night at Waiorongomai Station in the heart of rural Wairarapa and the next morning was transported to Pounui, about 30km southwest of Martinborough, where meandering country roads completely charmed me. At the turn-off to Onoke Spit, you’ll want to dig deep as it’s a fair old slog uphill, then down to Ocean Beach, which blew me away.

I loved the windswept, no-frills baches, waiting patiently for the summer crowds. The wild southern coast is utterly invigorating, then from Ōrongorongo it’s just 16km to Eastbourne, making for a 51km leg, and every single second was a treat. I’ll definitely do this trail again, and I’ll time my return for when the suspension bridge over the Tauherenikau River north of Featherston has been built.

This project, part of a $220 million package set aside for nationwide cycleway projects will link all five Wairarapa towns along the western cycle trail and, at 150m long and 17m high, the bridge is sure to be a thing of epic beauty.

When I rode these trails, I set off from the impossibly charming township of Clyde, first settled in the 1860s after the first traces of gold were found. Within a year of prospecting kicking off, this once sleepy region yielded more than 2000kg of gold and, for a time, the area was booming. Beginning with an easy ride through Clyde’s pretty streets, the sturdy stone buildings are a reflection of the town’s prosperous past, and I took my time to properly enjoy the atmosphere. After a quick gape at the incongruously colossal Clyde Dam, I coasted down towards the Clutha River, crossing via the Meccano-esque Earnscleugh Bridge before embarking on the pretty 22km to Doctors Point. 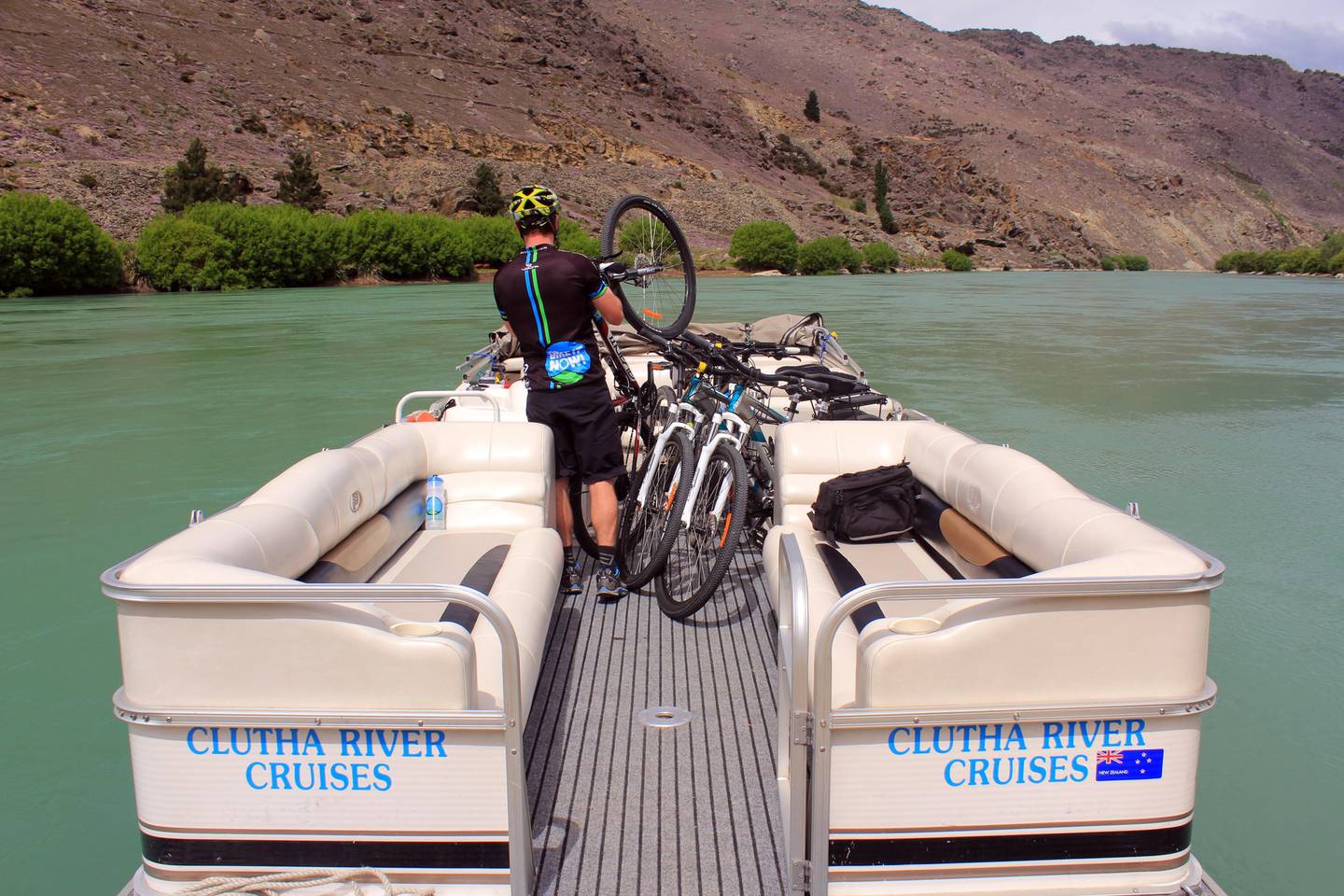 As I rode at the tail end of autumn, the path was strewn with golden leaves, while the smoky grey rocks on the far bank merged into the chalky greens of the river. On account of iffy weather, the 13km jet boat ride from Doctors Point to Shingle Creek was withdrawn from the menu, but that also meant I had the pleasure of riding back to Clyde, making for a pleasant 44km day.

Day two was 30km of scenic charm, from Roxburgh Dam to Roxburgh then on to Millers Flat. This day served up more gentle riverside paths with rabbits, hawks, hares, quails and fantails as my companions. As the snow on the surrounding ranges crept lower, I was very glad of my gloves.

When I rocked up to Roxburgh, I’d been told the space-age public loos were a must-visit, for everything is automated, definitely more than the bog-standard you expect from public dunnies. Then, after just 19km more of chilled riverside riding, I arrived at Quince Cottage, a little bedraggled, but no one seemed to mind.

The third and final day saw me propel myself from Millers Flat through to Beaumont and on to Lawrence, a jolly 43km jaunt. As I turned my back on civilisation at Millers Flat, I returned to the bush to ride alongside the fast-flowing river. After passing 100-year-old Horseshoe Bend Bridge, I stopped to pay my respects at the graves of Somebody’s Darling and William Rigney, the man who compassionately buried a stranger. Then Beaumont appeared on the horizon, and a helpful arrow pointed towards the pub. Allegedly “The Friendliest Hotel in Central”, the interior pays tribute to hunting with a wealth of creatures stuffed for all eternity.

Following a half pint of Speight’s, I was back on the trail with Lawrence in my sights, but there was no time to rest on my laurels here because when the trail leaves the river, I faced a bit of a climb from Beaumont to Lawrence, which included Big Hill Tunnel, a 500m passage completed in 1912. Once over the pass, it was easy riding to Lawrence where quirky shops, cafes and totem poles signalled the end of some of the most picturesque paths I’ve encountered.