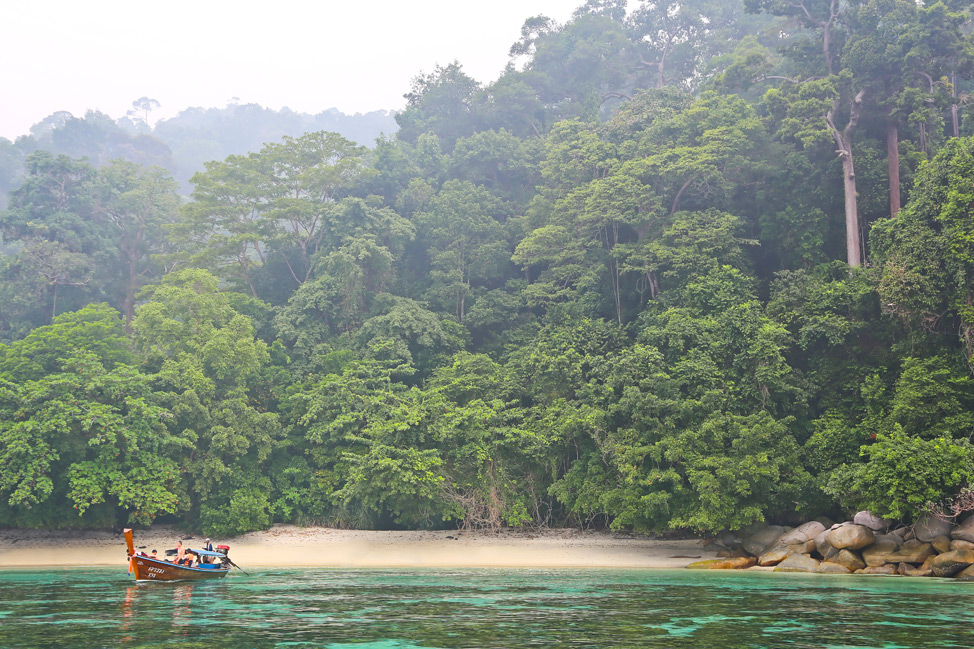 After two days gathering an ever-so-brief overview of Thailand’s coastal Trang, we pushed even further south towards Satun. Though the border between the neighboring provinces is unmarked, I noticed a stark difference as we entered the heart of predominantly Muslim Satun. Temples were replaced by mosques, women were swathed in colorful headscarves and simple signs outside hole-in-the-wall restaurants promised Halal food would be found inside.

There’s never been a better time to visit.

Well, there is certainly a better time to visit than the particular period when I did. I’d been hearing expat friends rave about the beauty of hidden gem islands in the area for years, and could hardly wait to see them with my own eyes. Except I couldn’t. As the guide on our boat tour of Satun’s marine park pointed to what was allegedly an island in the gray distance, I nodded noncommittally. “I’ll take your word for it.”

My visit coincided with the absolute worst of the 2015 Southeast Asia Haze, a crisis caused by illegal forest burning in Indonesia. This goes way beyond tourists getting disappointing vacation snaps — it was an ecological, economical and health disaster for the region.

While the famous stone arch of Ko Khai didn’t look exactly as Google had promised in the moment, I nonetheless enjoyed hearing the local lore of the good luck couples who walk through the curved stone will enjoy, and watching the excitement of our Thai hosts as they sauntered through themselves.

Back on the boat, we passed by more of the fifty-one islands that make up the Tarutao National Marine Park, and I vowed to return to see them more clearly someday.

Another notable stop was the islands of Ko Hin Ngam, covered not in sand but in beautiful black-and-white-swirled stones. Pretty as the pebbles were, we didn’t dare take one as a souvenir, as local legend suggested we’d lose all the luck we’d gained on Ko Khai — and then some — if we dared.

I was skeptical when we stopped for snorkeling, but was pleasantly surprised to find that the visibility was better below the surface than above it. The diving trip in Koh Lipe that has long lingered on my bucket list quickly moved up a few notches in urgency.

Back on land, we set off to explore a part of Satun paid even less attention than its stunning islands — the mainland. In 2008, a small local cave gained national attention when the 1.8 million-year-old jawbone fossil of a Stegodon was found inside by a local fisherman. It’s not hard to picture the prehistoric elephant-like giants roaming through this lush Jurassic Park-like setting still today.

To my over-eager chagrin, self-paddling is not allowed, though I appreciate that guiding provides a rewarding employment opportunity for the local Thungwa community.

The 2.5 miles journey follows the curves of the longest salt water cave in Thailand. And the possibility of finding fossils isn’t the only draw — distinctive rock formations inspire creative interpretations, stalactites and stalagmites glisten in the low light, and the cave spits out into an idyllic mangrove forest.

At one point, we turned off our torches and marveled at the total blackness that surrounded us.

Satun is not a simple province to visit. The nearest airports are hours away in neighboring provinces, and connection times can make the journey from other major destinations a full day mission. While islands like Koh Lipe are poorly kept secrets, there are plenty of barely visited specks of sand where you can re-enact your own version of The Beach, and countless mainland corners where you can well and truly congratulate yourself for having gotten off the beaten path.

I can’t wait to get back — hopefully before the crowds do.

Many thanks to the Tourism Authority of Thailand for hosting me on this post-TBEX press trip.