Terra and Tide: Back down to earth at Waiheke Island 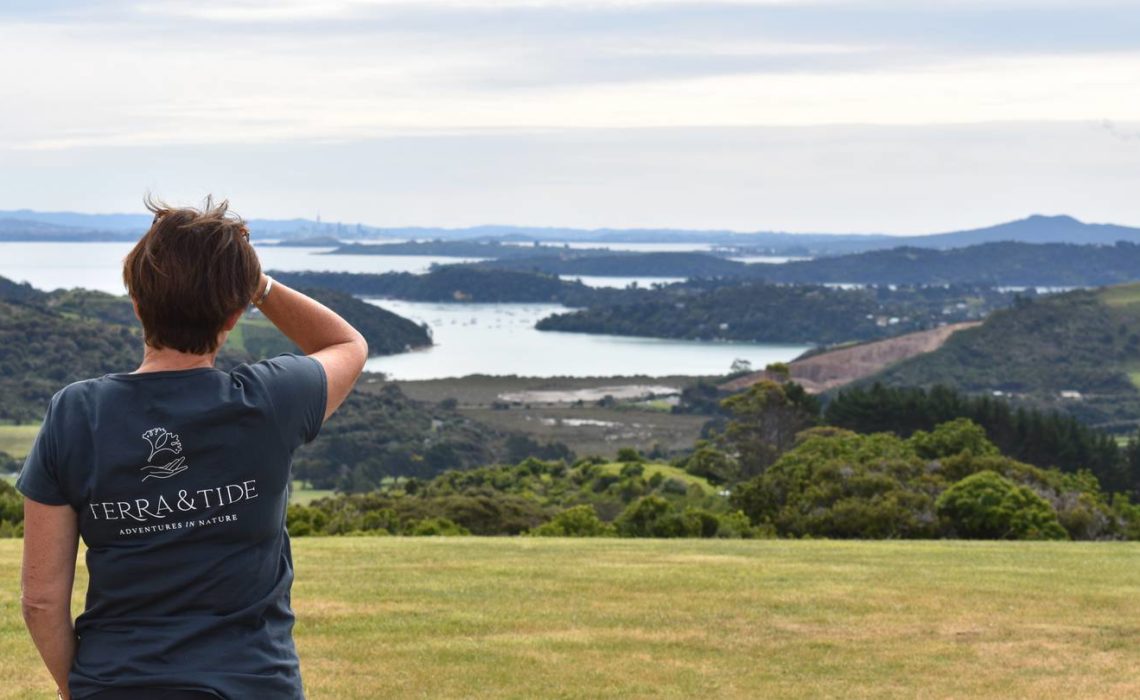 “When you’re stuck in the city you don’t realise what treasures are right on your back doorstep.”

Terra and Tide owner Gabrielle Young summed up our tour with that very sentence, as we cruised around Waiheke Island’s northern shores.

When I lived in Auckland for 18 months, I never went to the island, despite the 35-minute ferry ride from the CBD being shorter than many of my car trips with flatmates to various parts of the city.

Within an hour of sailing around Waiheke’s sandy white bays that are hugged by bush and serenaded by birds, I wondered why I’d not visited earlier. 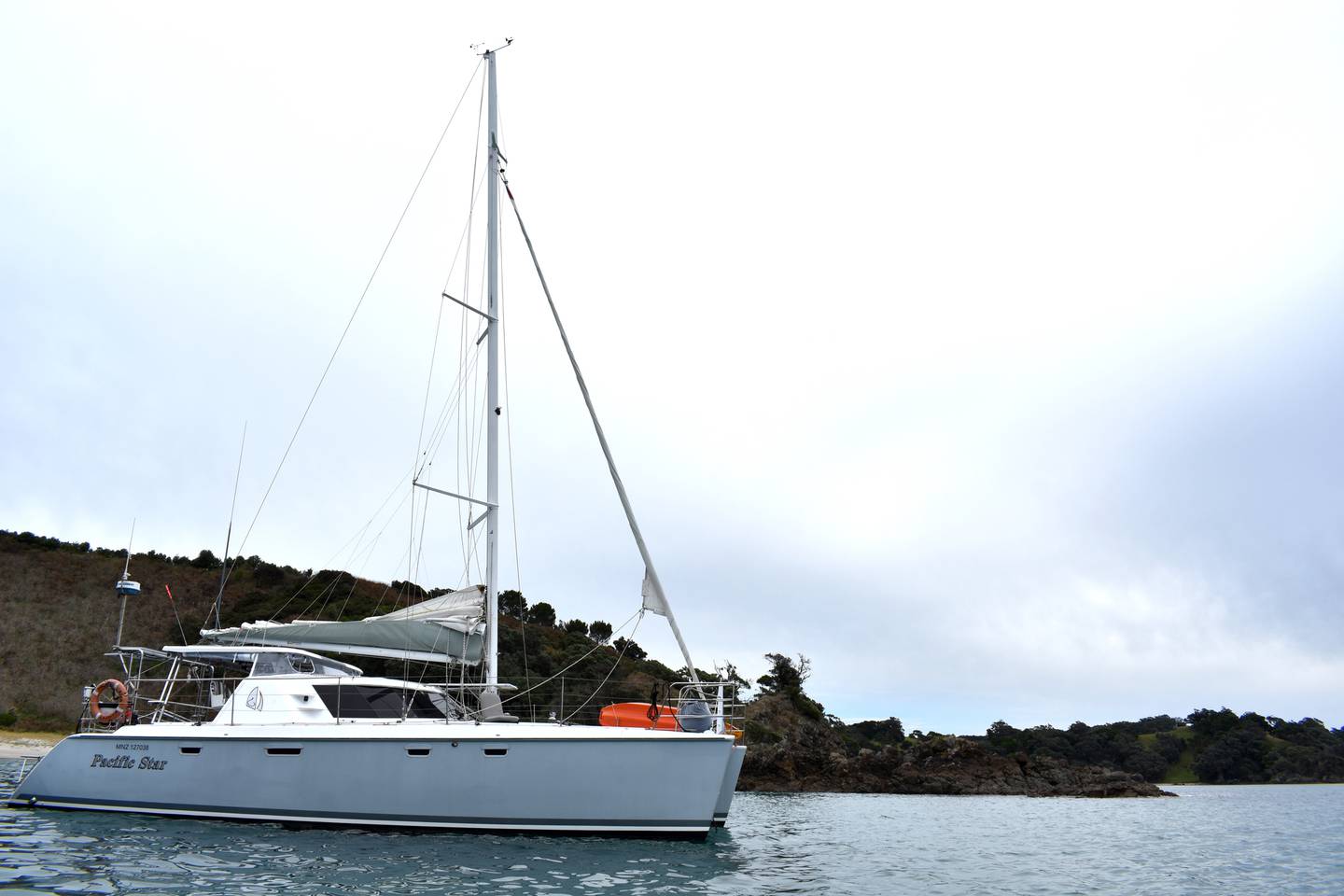 Arriving at Mātiatia, we were greeted by Young and given a quick tour of the boat and told how to keep safe aboard the 41-foot catamaran, the Pacific Star.

Then we were out on the Hauraki Gulf, hearing about the diverse histories of the islands from Gabrielle, while her partner Bruce McLelland skippered the yacht.

This year, the pair blended her background in hospitality, conservation and guiding with his lifelong experiences on vessels, to “do something together” and establish Terra and Tide.

It’s the newest sailing operation out of Waiheke Island, and on land, Young’s knowledge of nearly 20 years on the island is the backbone of walking tours, forest therapy and wellness retreats. 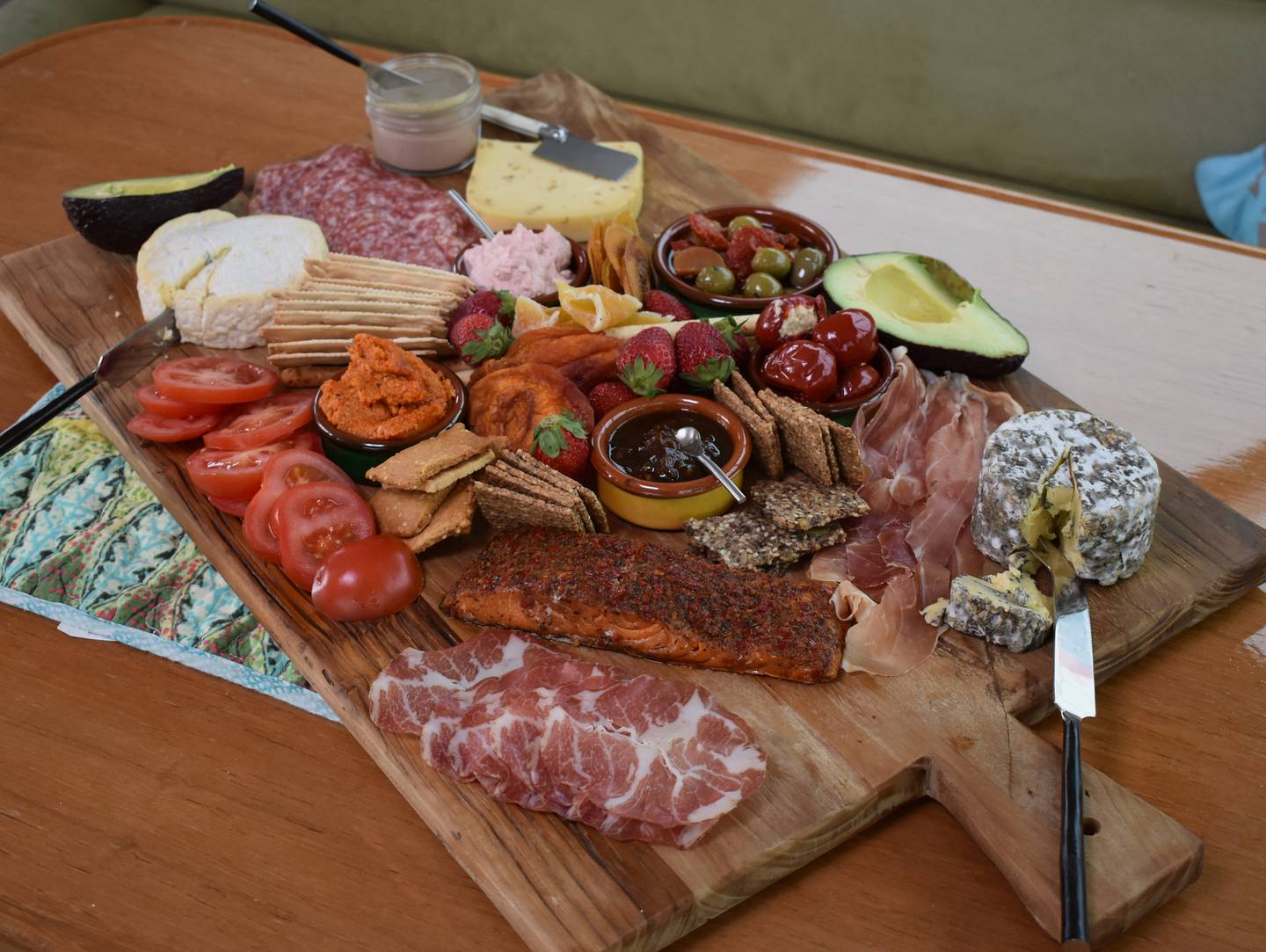 After just over an hour on the water, we had spotted a pod of dolphins surfacing around a boat 100m away.

They’re just some of the sealife bearing the brunt of pollution, human disturbances and overfishing in the gulf.

For that reason, there is no fishing on Terra and Tide’s trips, and Young strives to ensure visitors change their behaviour to halt the deterioration of the gulf, after hearing about its plight.

On our way east around the island we stopped at the Australasian gannet colony at Horuhoru Rock. 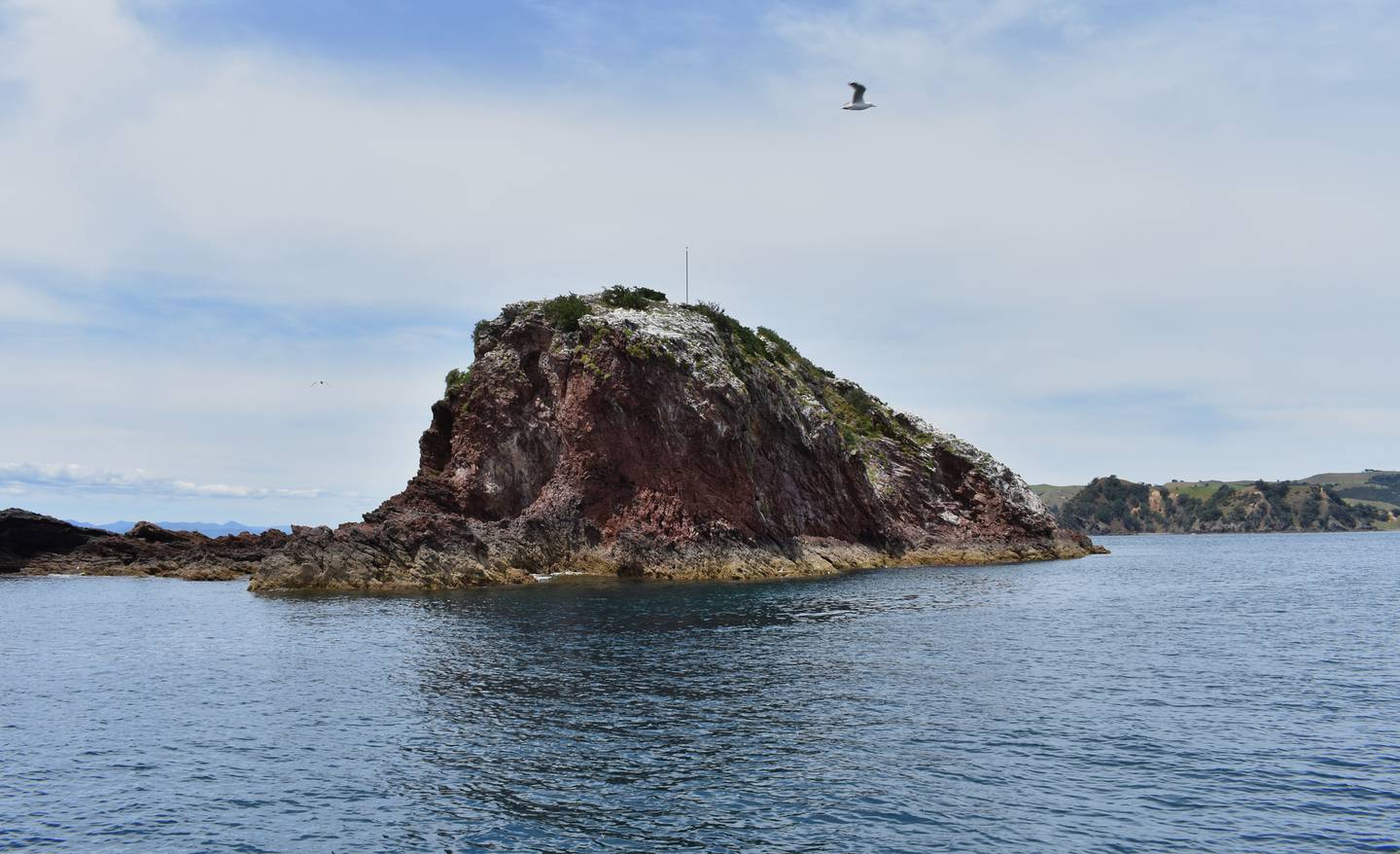 It is about 1km offshore and one of five colonies in New Zealand.

The rock was named by members of the Tainui waka when they heard water lapping on rocks, reminding them of their departure from Hawaiki, and Horuhoru means “heartfelt and uncontrollable sobbing”.

After a fascinating time watching the gannets nesting and diving, it was time to head back to the island for lunch at a bay accessible only by boat.

We had hot fresh bread and salad with a stunning platter of cheeses, cured meats, smoked salmon, dips and pate, as well as dried and fresh fruit.

Once our food had settled, I was off for a swim and paddleboard around the bay, before venturing in the dinghy off the yacht to the next bay around to the east.

We had a stroll along the beach and watched the stingrays glide around the shore just a couple of metres deeper.

By mid-afternoon we were homeward bound, and our hosts explained all of the seaside settlements and their histories as we made our way back to the wharf.

Onshore, dinner at Charlie Farley’s and a stay at the Onetangi Beach Apartments left us rejuvenated for our second Terra and Tide adventure.

This was a morning dedicated to relaxation led by Young, one of only four New Zealanders internationally accredited as a forest therapy guide

The expanding areas of bush plantings on the island, and corridors of older forest meant we didn’t have to veer far from the road before we heard only a stream and birdsong.

I hadn’t meditated for months so coming back down to earth, quite literally, was an incredible reminder of all the little things we don’t notice while we carry around our stresses.

Native birds including kererū, pīwakawaka and tūī kept us company and the smells of the bush became tastes when we ended the morning with cups of mānuka and kawakawa tea. 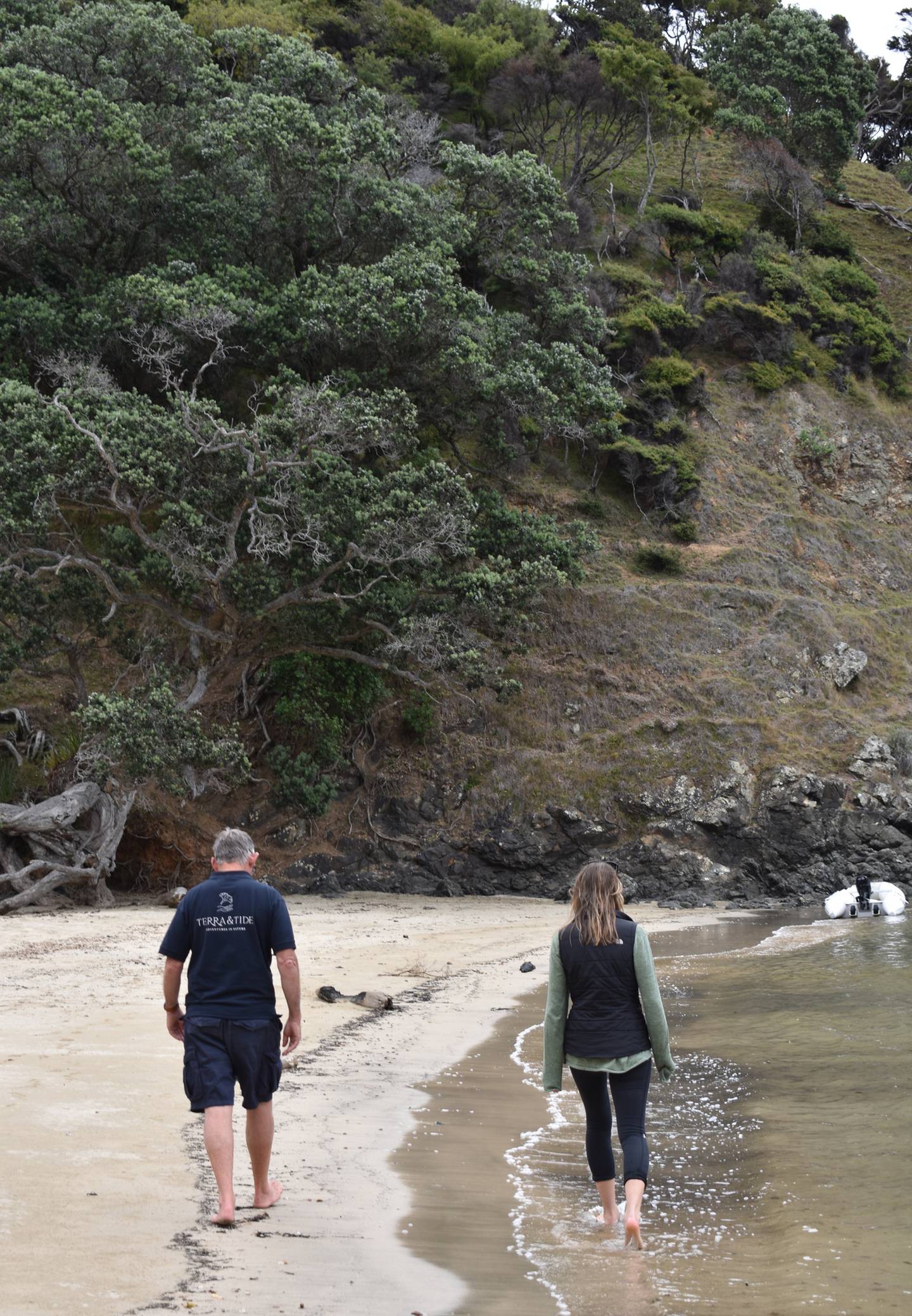 Young explained that when she and her partner moved to Waiheke Island in the early 2000s she says their “life got a whole lot richer” – thanks to the passionate people and places to sail, walk, swim and eat and drink out.

They hope Terra and Tide will share some of the Hauraki Gulf’s treasures in “a new way”.

Along with the Hauraki Gulf sailing experience and forest therapy, Terra and Tide also offers a range of guided walks for every fitness level, age group and interest – from vineyard, art, beach and bush walks.