The conference has gone virtual. But who says attendees have to stay home? 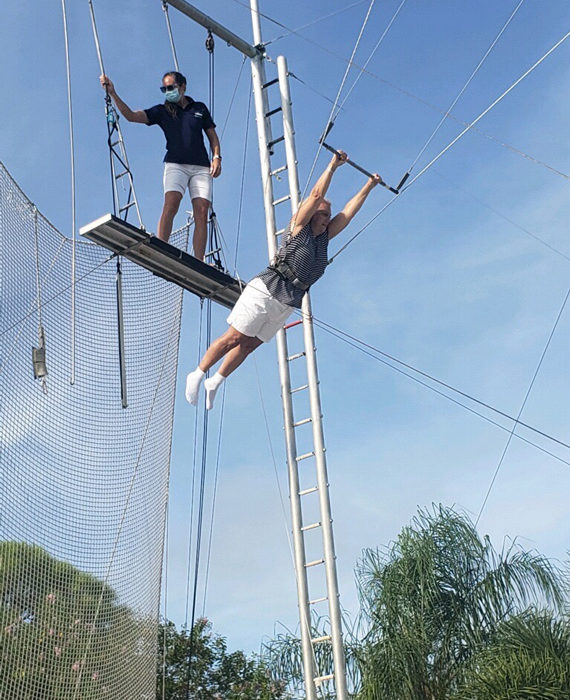 Rachel Morrell, a Franklin, Tenn.-based travel advisor with Creation Vacation, has four children at home ranging in age from 9 to 17. The youngest is in third grade, and the oldest is a senior in high school. It’s a full house and, as Morrell described it, one of her kids usually needs something from her.

So when she found out that the hosted buyer program Global Travel Marketplace (GTM) West, organized by Travel Weekly and TravelAge West, was going virtual this year, she decided to get creative with her work setup.

Morrell called the owner of her agency, Joanie Davis, also a GTM attendee. “I said, ‘Joanie, do you want to go somewhere for GTM?'” Morrell recalled.

It was an immediate yes from Davis, and the two started planning. Morrell had never been to Cabo San Lucas, Mexico, before, so she got in touch with her La Coleccion Resorts representative. They connected her with Live Aqua, and she and Davis planned a trip to stay in Live Aqua’s Private Residences for the conference, which was held Sept. 20 and 21. Another Creation Vacation advisor, Dottie Bogan, joined them, though she wasn’t a GTM delegate.

Davis and Morrell attended the conference virtually, together during general sessions and separately during supplier meetings.

They also had a chance to explore Cabo.

“Our mood was just so elevated because we were in a fun destination,” Morrell said. “When I was doing my one-on-one [meetings] or when I was in my boardroom meetings, someone would say, ‘Wait, where are you? You’re not in your office.’ And I could just turn the computer around and be like, ‘I’m in Cabo!'”

Morrell and Davis weren’t the only advisors to attend GTM West from a new destination.

Jami Turner, owner of the Travel Fanatic in Odessa, Texas, also attended remotely, from the Club Med Sandpiper Bay in Port St. Lucie, Fla. She was joined there by several other KHM Travel Group affiliates and friends: Debra Dimit, of Getaway Layaway Vacations in Fort Wayne, Ind., and Connie Bish, of Travel Getaways by Connie in Tiffin, Ohio.

“Club Med was someplace we’d heard about,” Turner said. “We’d met our [business development manager], but we had never stepped foot on the property, and we just decided that that was the perfect way to do two things.”

Both parties — the Cabo crowd and the Sandpiper Bay bunch — said their remote attendance at GTM West was a benefit not just for their ability to focus solely on the programming but because it enabled them to experience new destinations they can subsequently sell to clients.

Not only is firsthand knowledge the best way to share information with clients, Turner said, but it becomes a catalyst for marketing.

GTM West was held on a Sunday and Monday. Turner and her fellow agents at Sandpiper Bay arrived the Friday before and went on a site inspection Saturday morning. That afternoon, they spent time experiencing the property’s amenities and activities.

Morrell and her group also arrived on Friday. They did a tour of Cabo San Lucas and site inspections of Live Aqua and the Grand Fiesta Americana that day.

“We got all that in before the conference started, which was really helpful,” Morrell said. “We were like, we don’t just want to come here for the conference, we need to experience the destination a little bit.”

Both groups also benefited from having multiple conference attendees, especially when it came to supplier meetings.
“It’s almost like there were two of me, that I got to go to GTM twice, because I got all of [Davis’] information and mine,” Morrell said.

Each morning, Turner’s group would meet for breakfast and make a plan about what questions each would ask suppliers. They would regroup at dinner to share their notes.

On Monday night, following the close of GTM, Turner’s group found a table near the pool at Sandpiper Bay around 9:30 to do a final comparison of notes, “line by line, every single supplier,” she said.

“For us, it just continued to carry forward — the excitement, the conversation,” Turner said. “I think we came back to our rooms at, like, 1 a.m. after really sitting and talking and going through everything.”

Both Morrell and Turner said they felt the Covid-19 health and safety precautions in place while traveling and in-destination made them feel safe. They each took note of sanitization efforts, the encouragement of social distancing, mask usage and other precautions.

“I felt like they were being very responsible, and it was also really fun,” Morrell said of Live Aqua.

Turner had a similar takeaway from Sandpiper Bay and noted that other guests were also mindful of behaving in a safe manner.

“Everything was being cleaned and wiped down,” she said. “I thought they did an excellent, excellent job, as far as making all of us feel safe.

The experience of attending a virtual conference remotely was so positive that both Morrell and Turner said they would jump at the chance to do it again. It offered a distraction-free way to experience the show from a new destination as well as offering learning opportunities.

Turner said travel advisors are key to restoring consumer confidence in travel, and she believes her trip will help convey that message.

Cheap Holiday Deals 2016 - Book Holidays with On the Beach
Travelodge: Search and book 500 hotels throughout the UK and Ireland
Book coach travel to 100's of UK towns, cities and airports with National Express!
Vacation deals,travel specials and cheap hotel reservations on BookIt.com
List your rental for FREE on HolidayLettings
Send online today with Parcelforce Worldwide
Leave a comment