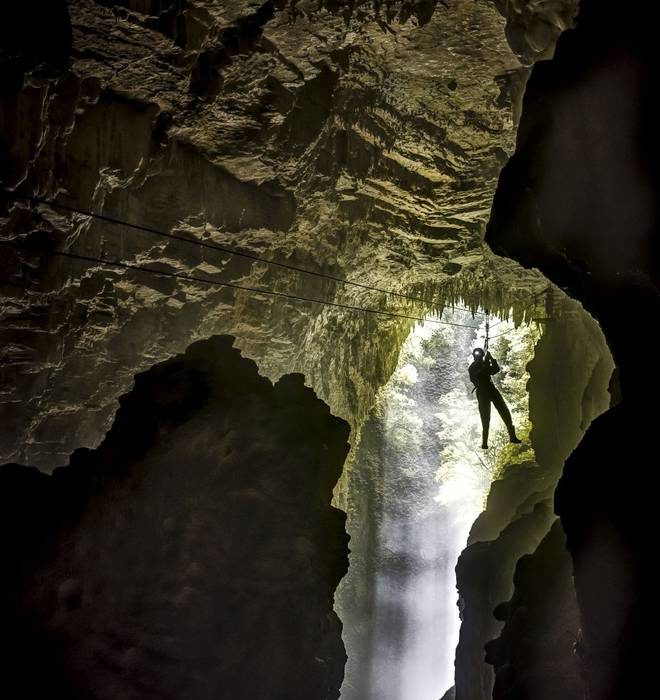 Waitomo might be known for its glow worm caves, but the countryside of King Country is riddled with troglodyte passageways and grottoes. While some are easily reached, there are hundreds of caverns only accessible to the most adventurous tourists.

After the longest pause in visitors in living memory, guests are back to abseil and zipwire into the caves. If they dare.

The world-famous caves of Waitomo have been attracting tourists since the early 1900s. The bio-luminescent creepy crawlies have appeared in films and documentaries, and in previous years the glow worm caves have drawn in around half a million visitors. Like so many moths, enticed by the bright lights.

However, fewer tourists have seen the caves like this.

Waitomo Adventures leads a choice of trips into the underworld. There are seven adventures run by the company, which takes guests on tours of the hundreds of known caves in the area.

From the flooded TumuTumu caves, the Haggas Honking Holes to the sublime St Benedict’s Caverns, visitors are invited to traverse the caves via zipline, abseil and float tube.

Each trip provides a different challenge.

“Most of them are simply sitting quietly under farmland with their glow worms twinkling away quietly in the dark,” says Nick Andreef, the company’s CEO.

To get to these the company has set up a network of wires, ladders and belay points.

“We have two caves with significant ziplines in them,” says Andreef. St Benedict’s Caverns is one which is accessed by a series of abseils down a 60-metre shaft – it’s essentially rock climbing underground.

The other called Through the Window does not require the vertical descent but it does still need a head for heights, entering the 80-metre high cavern via a series of flying-fox ziplines.

The company is running weekend trips at this stage, after opening up after the national lockdown in May.

Individual outings cost between $144 and $250 per person, with most of the more challenging escapes have a minimum age requirement of 15 years.

If you’re after a full day in the darkness, the Waitomo Adventures is offering a welcome –back special exploring all the area’s most spectacular caves for $535 with lunch and dinner included.

Travelodge: Search and book 500 hotels throughout the UK and Ireland
Visit Sykes Cottages and browse thousands of hand-picked holiday cottages across theUK and Ireland
View the Macdonald collection of luxury hotels, resorts and spa hotels in some of the finest UK locations
Check out Expedia's daily travel deals
Apple Vacations: America's #1 Tour Operator
Book your flight with Virgin Atlantic
Leave a comment