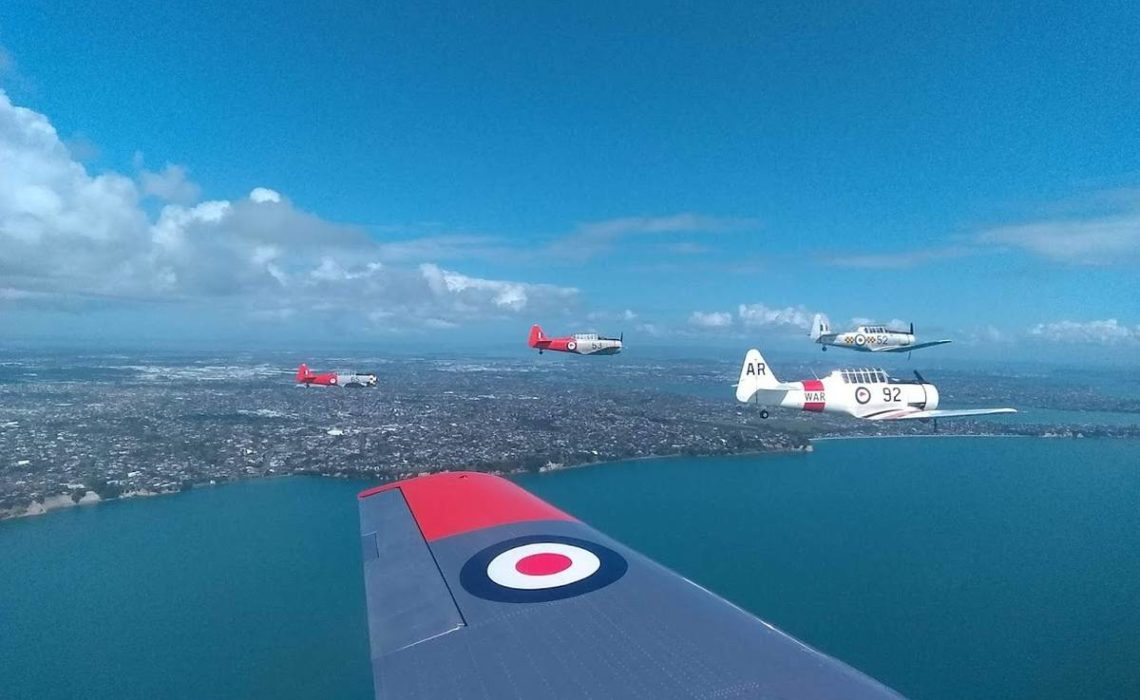 On Sunday, Auckland was treated to blue skies and a surprise flypast by historic warplanes.

A flying circus of Tiger Moth bi-planes, small display aircraft and a Supermarine Spitfire set off from Ardmore Airfield for an “unofficial flypast” of the Auckland Cenotaph to mark the Battle of Britain 80th anniversary.

The impromptu airshow was in honour of the 135 New Zealanders who flew in the air war over Britain.

While the commemoration had been cancelled due to local Covid Alert Level on public gatherings, the aviation club had been given the go ahead for a by CAA.

“We didn’t want to risk publicising the event” said general manager Trish Reynolds. “Our members decided to fly at their own expense so that the commemoration could still be seen.”

The flypast included pilots from the Roaring Forties display team who perform at air shows across the country and the annual Anzac Day formation flyover.

This year’s Anzac air display was grounded due to the nationwide Covid lockdown, as was the Warbirds over Wanaka air show, which attracts 55000 aviation fans a year.

The Battle of Britain commemoration was almost scrapped as well. Because of guidelines on group gatherings they were limited to 10 pilots, who took part in pre-flight briefings this weekend.

The Warbirds operate out of Ardmore Airfield in south Auckland, with a collection of 30 First World War replica and Second World War aircraft. The collection of private and syndicate-owned aircraft includes Spitfire MH367, which was rescued from a scrapheap in 1988.

The machine built in 1943 – three years after the turning point of the Battle of Britain – is enormously fuel thirsty, says Reynolds. It costs over $6000 per hour to keep airborne in fuel alone.

“As for everyone, it’s been a difficult year” says Reynolds. The not for profit, which receives no regular public funding, relies heavily on memberships fees and fundraisers to keep flying.

The next air show will be held on December 6, national alert levels permitting.

New Zealand made the third largest national contribution to the 1940 air campaign, after the UK and Poland. 135 New Zealanders were involved in the Battle of Britain which took place over southeast England – 15 of whom were killed by enemy aircraft and five in air accidents.