Brisbane to Big Red Bash: the 2096km trek to the world’s most remote music festival 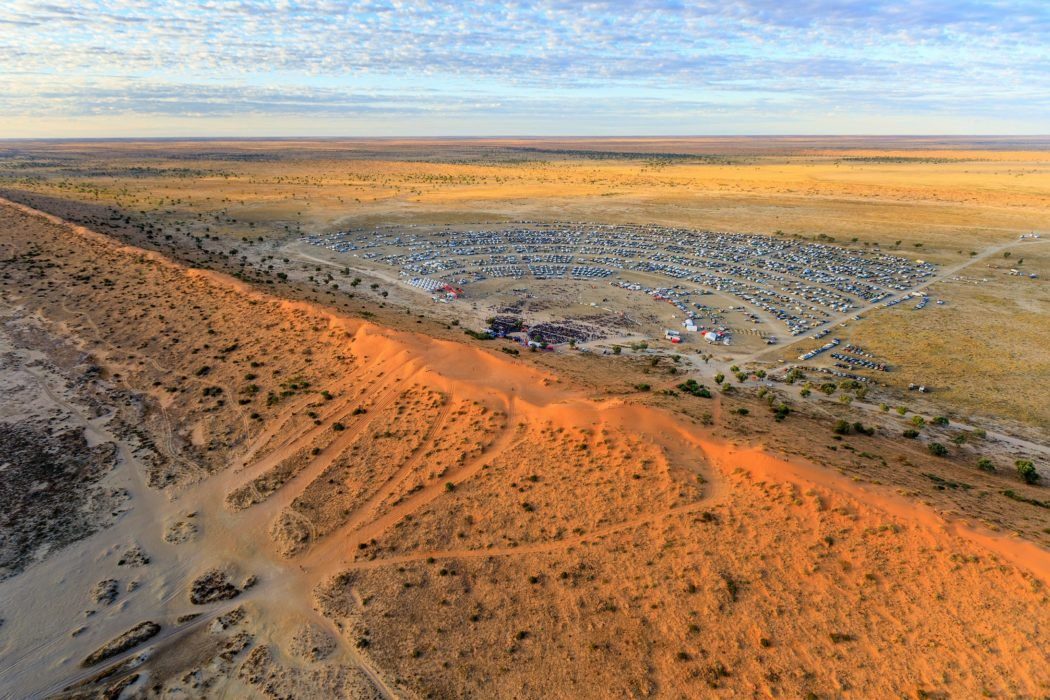 Humans have this overwhelming hunger to devise plans that seem outrageous, impossible and simply too big, before going ahead and just getting it done.

JFK wanted to put man on the moon, Captain Cook wanted to sail the Pacific and potentially find the eastern side of New Holland, and Eminem just wanted to be a really good white rapper. Many laughed at their ideas, but they all found a way to achieve their dreams.

A couple of years ago, Greg Donovan devised his own outrageous plan; to hold an annual rock concert with musical royalty in the shadows of a sand dune on the edge of the Simpson Desert. And like many before him, he pulled it off and the Big Red Bash, the most remote music festival in the world, was born.

Getting there will require your own ‘dream big but get it done’ moment as you traverse 2096km from Brisbane– via Winton (because, dinosaurs) – to Birdsville for The Bash, but like the engineers, sailors and Dr Dre that aided those above, we’ve helped map your path to greatness with this epic five-day road trip.

AM: EARLY BIRD GETS… THERE QUICKER 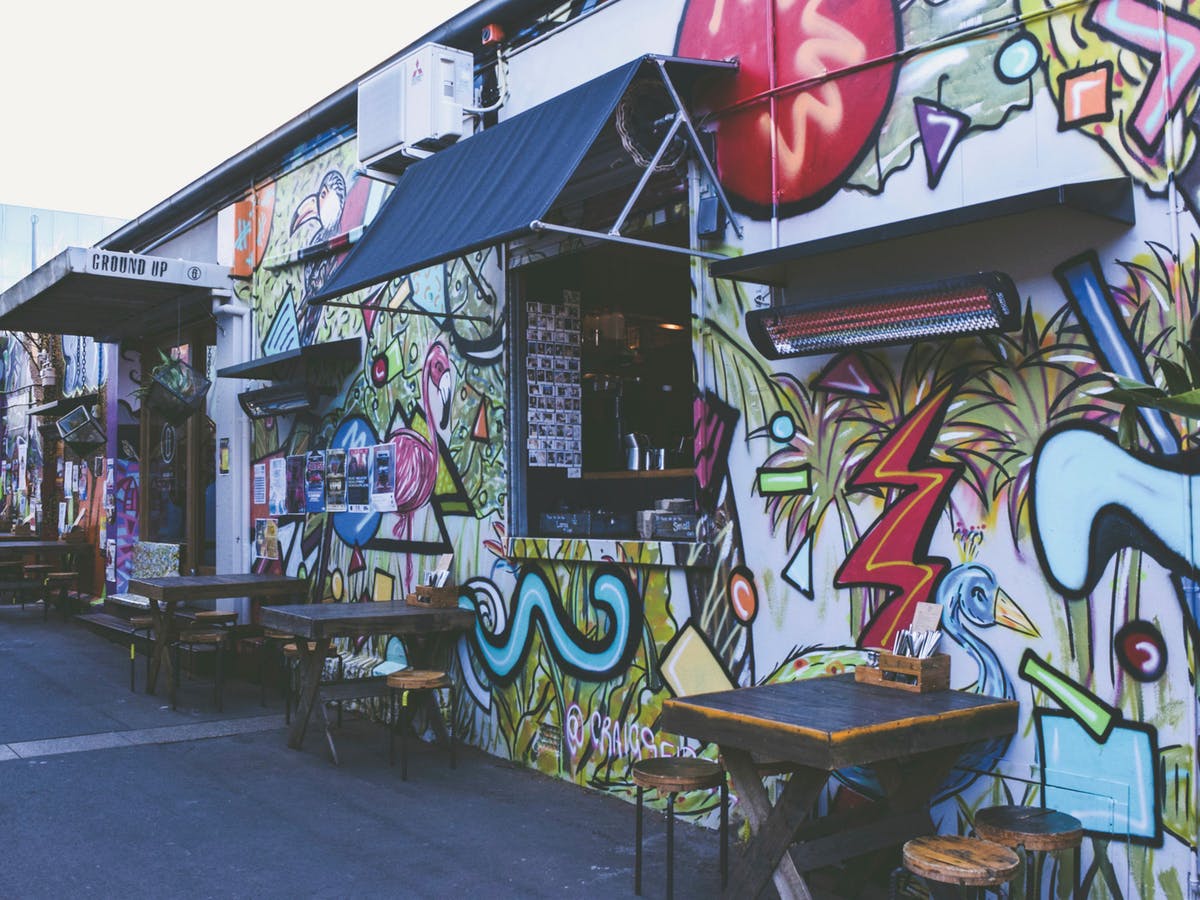 Get up and get going, you’re not going to travel more than 2000km to the Big Red Bash in the comfort of your bed – the road awaits.

Destination numero uno is Toowoomba, roughly two hours from Brisbane. The outback has many amazing things to see, do and eat, but good coffee must come first. Thankfully, Toowoomba knows how to brew the perfect cup with a side of cool thanks to its street art scene.

Ground Up Espresso Bar tucked away down the Searles Walk laneway off Ruthven Street is a locals’ favourite, as is The Finch and The Engine Room Café – you’ll be satisfied and full of ready-to-drive energy regardless of where you stop.

PM: HAVE YOU MET MITCHELL? 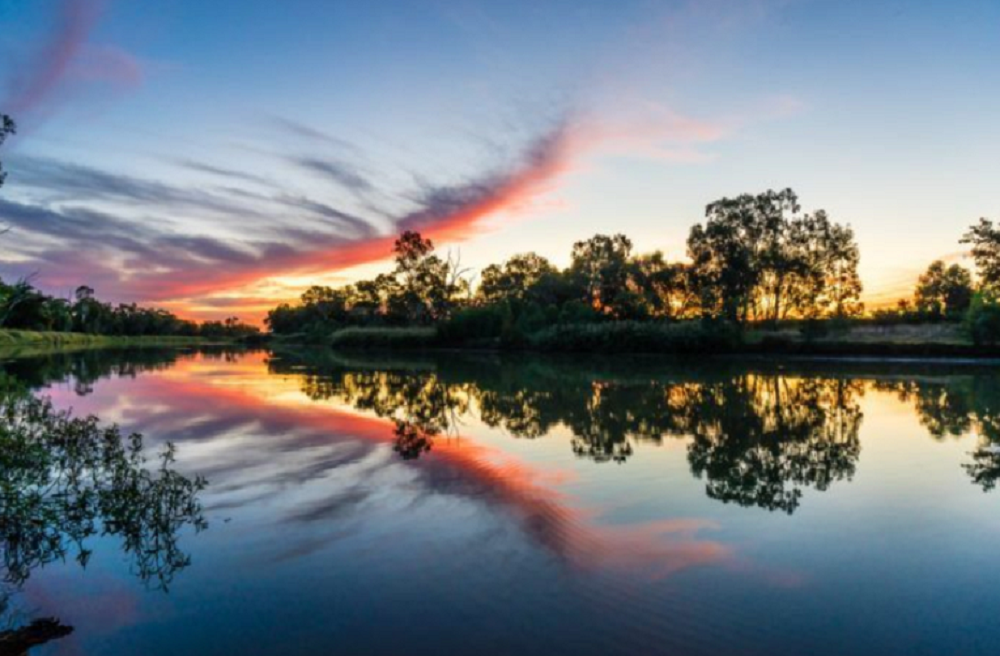 Pumped up on coffee power, head straight for the final destination for the day, Mitchell, about five hours drive from Toowoomba. You’ll drive through plenty of quaint country towns on the way where you can stop for a quintessential (and one of many on this trip) pub meal, including Dalby, Chinchilla and Roma.

After a long day in the car you’re probably due for some RnR – look no further than the thermal, mineralised waters of the Great Artesian Spa found at Mitchell’s aquatic centre.

For only a couple of dollars, you can soak in the naturally sourced water from the Great Artesian Basin. Once refreshed, a cold beer on the banks of the Maranoa River is the perfect way to end the day.

AM: FIVE PUBS AND A VERY FAMOUS TREE

Day two is the biggest stretch of your journey; you did want to tackle something that felt outrageously big, right?

Today you’ll make your way north-west on the Landsborough Highway for a couple of stops before reaching the heart of the outback, Longreach.

One of those stops should be Tambo, the oldest town in western-Queensland, before continuing on to Barcaldine.

Sorry drivers, but Barcaldine (pronounced: Barcy) may be a little bitter-sweet. Passengers, on the other hand, it’s your lucky day, as this tiny little town has five pubs – it’s time for a good ol’ fashioned bar crawl!

Hit up the Shakespeare, Railway, Commercial, Union and Artesian Hotels for a cold one and another classic pub lunch.

Besides the iconic pubs, Barcaldine holds its place in history thanks to the unsuccessful shearers strike in 1891 that led to the formation of the Australian Labor Party, which was held under a 10-metre ghost gum in the middle of town. The tree that started a movement was unfortunately foiled by poison in 2006 but now an incredible art installation stands in its place to preserve the history of the spot – and it’s worth a visit.

PM: IT’S BEEN A LONG-REACH BUT YOU’RE HERE 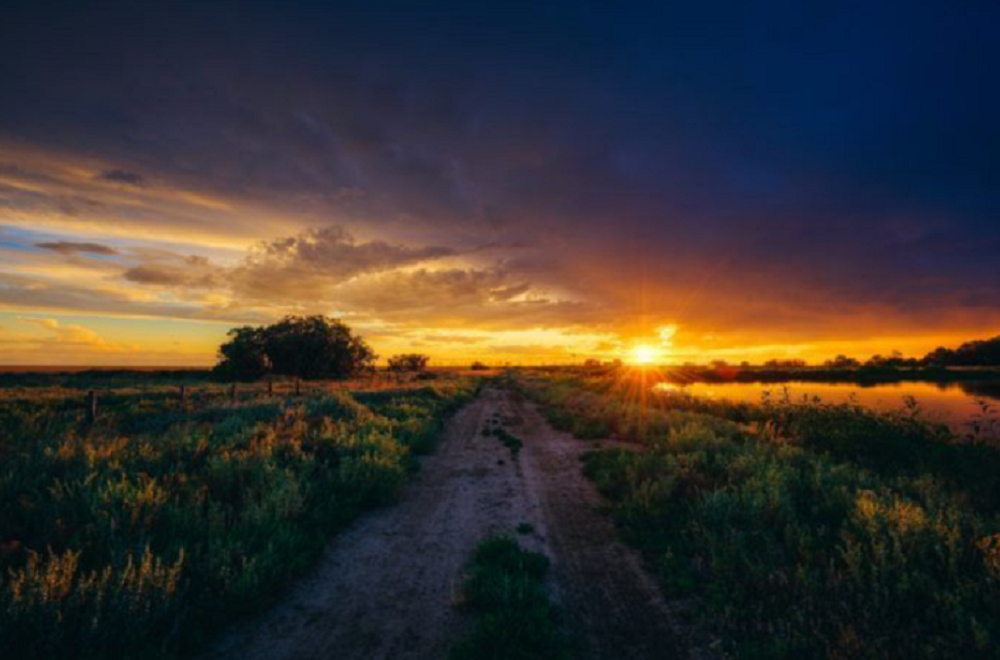 You, the hero driver, have managed to navigate your 4WD-steed to Longreach, but before you settle in for the night, keep driving a little further to Captain Starlight’s lookout for one epic sunset over the countryside.

If you’re not towing a van or living the tent life the entire trip, book a room at the Saltbush Retreat tonight. Top tip: enjoy a nice long soak in the old-fashioned clawfoot outdoor baths while marvelling at the Milky Way above.

AM: HIT THE TOWN

One does not simply ‘drive through Longreach’. With so much to see and do you should spend the majority of today here, or better still, expand your trip an extra day (the bigger the better).

From river cruises to walking on the wing of a Boeing 747 and tucking into a steak at Harry’s, there is no shortage of must-do activities in town. Check out this 48-hour guide for full inspo. 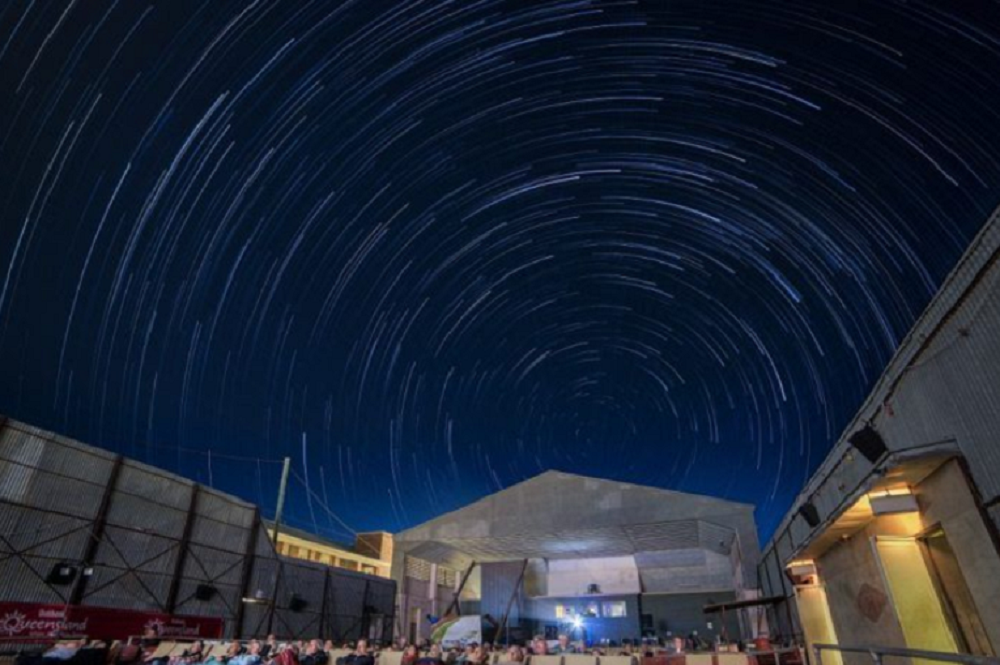 Once a jolly poet wasn’t anywhere near a billabong because he was in Winton performing a really good song for the first time.

Banjo Paterson’s iconic ballad, Waltzing Matilda, is a tune every Australian has belted out at least half a dozen times in their life, but did you know it was performed for the first time at the North Gregory Hotel in 1895? The pub still stands today and is worth a visit for this alone (not to mention the food).

Tip: If you’re in town on a Wednesday night, visit the Royal Open Air Theatre, home of The Vision Splendid Outback Film Festival, to enjoy an old-school film under the stars.

AM: DINO MIND IF I DO 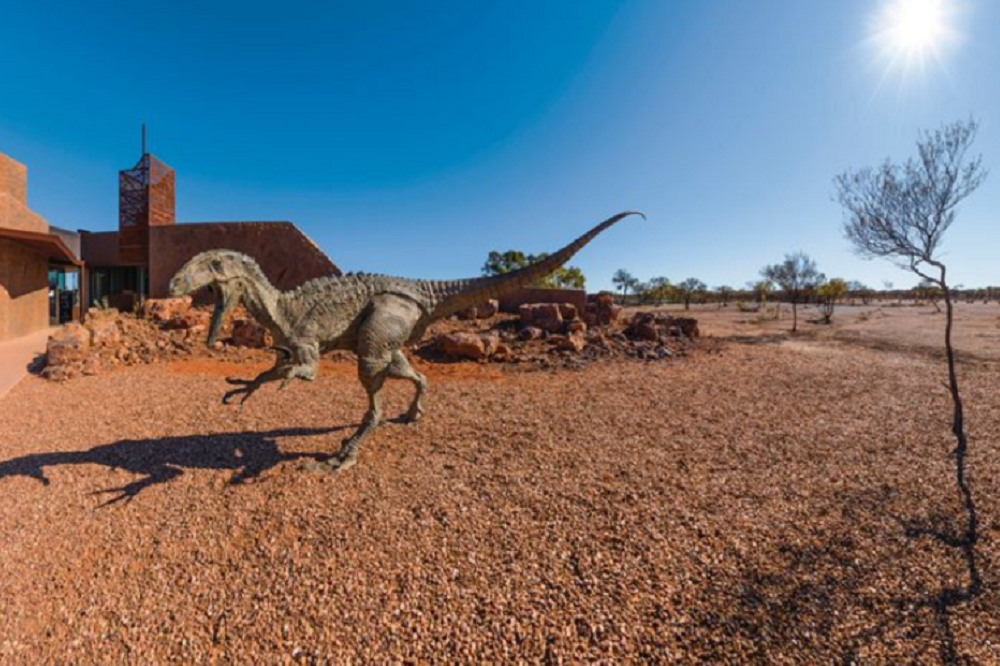 When you drive into the Australian Age of Dinosaurs (AAOD) and cast your eye over the surrounding region, from the jump-up it’s not hard to picture the ancient beasts roaming this very land.

If your imagination isn’t that strong, the Dinosaur Canyon exhibit will paint the picture for you with life-size statues of Pterodactylus and the Kunbarrasaurus, as well as the Dinosaur Stampede and Death in the Billabong exhibits.

Only a small number of dinosaurs have been discovered in Australia, but this is changing fast thanks to the team at AAOD, who run the most productive Fossil Preparation Laboratory in the Southern Hemisphere.

Here, you can learn how to prepare real dinosaur fossils for display, and at certain times of the year, you can join an expedition to dig and discover real dinosaur bones. Your inner-child is probably losing its mind right now at the idea of potentially discovering a new species.

PM: ONE LAST STOP BEFORE BIRDSVILLE

Once you’ve finished impersonating Ross from Friends at AAOD, continue south-west to the penultimate destination of your epic journey, Boulia.

When you think of a golf course you picture manicured lawns, impeccable greens and water traps that one too many golf balls lay at the bottom of. Now, if you picture the exact opposite of that you have the Boulia golf course – more dust than a dapper Scotsman but still worth a hit and giggle when you’re in town.

More than a hundred million years ago, Boulia lay on the western edge of the vast inland Eromanga Sea, which was home to a range of reptiles, some of which resembled the Loch Ness Monster. Long story short, the ocean turned to desert, which was really unfortunate for the dinosaurs but great for people who want to check out their fossils today at the Marine Reptile Fossil Display at the Stonehouse.

You can taste it. You can smell it in the air. You’re only 381km away.

From Boulia you’ll head to Bedourie (population: 120) before your final stop of Birdsville. They like towns that start with B out here.

The Royal Hotel in Bedourie has withstood the rigours of desert life since 1886 and has barely changed since that first beer was poured. It’s also the best place to fill up before your final stretch to the Big Red Bash.

Join the conga line of 4WDs and caravans as Birdsville transforms from a town of 100 to more than 6000 over the weekend. Hitting ‘traffic’ after 2000kms of open roads may seem strange, so be prepared for a little queue, it’s all worth it.

All that is left to do now is enjoy three days of the most remote music festival in the world, starting with sunset on top of Big Red. Bliss.

Sit back traveller, your epic journey is complete for now, but like those astronauts and Captain Cook, you’ll have to return home. Eventually.