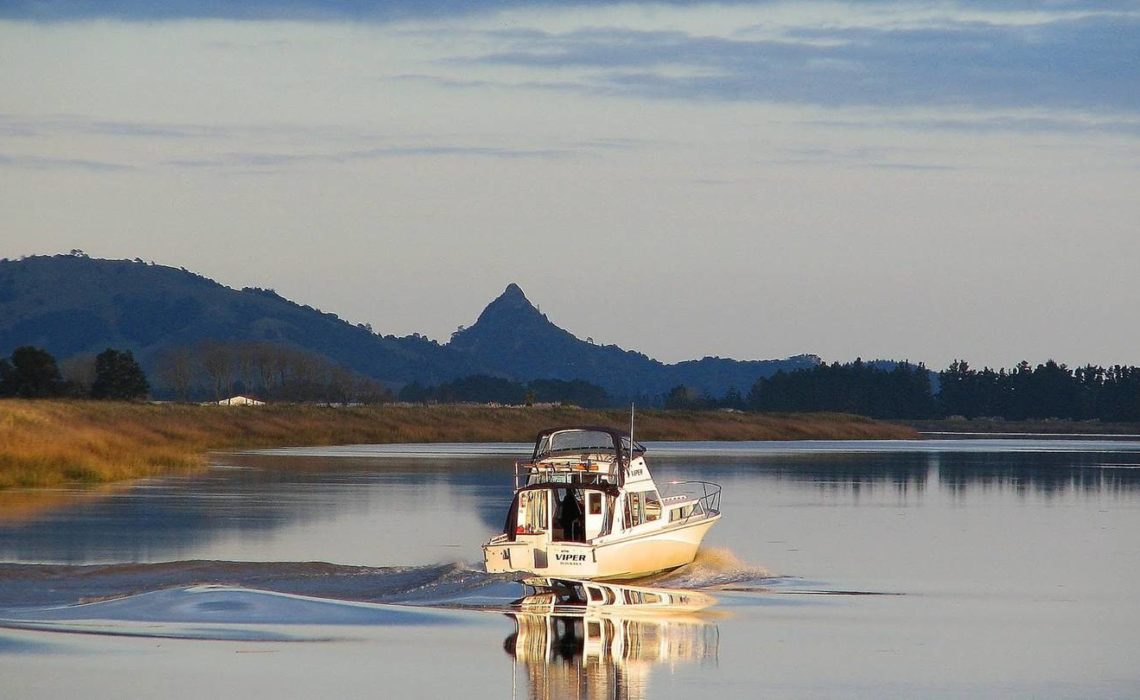 To travel Northland’s Kauri Coast is to journey through time and a world of giants.

Starting at the State Highway 12 turn-off at Brynderwyn, the route skirts the Kaipara Harbour’s northern reaches and pretty, historic settlements.

The Southern hemisphere’s biggest harbour, the Kaipara’s saltwater rivers and shores once provided food, transport and warpaths for Māori. In the mid-1800s a wave of newcomers swept in on the “kauri rush”.

The timber story is best told at the world famous Kauri Museum at Matakohe. But further west the magnificent Ripiro Beach is another giant Kauri Coast story.

The beach stretches 107km from Pouto on Kaipara Harbour’s northern mouth to where Maunganui Bluff surges 460m from the sea.

Although by the mid-1800s the Kaipara and Northern Wairoa River comprised the country’s busiest sea route because of kauri and gum, entry to the harbour was perilous. The sea and shifting sands off Pouto became known as the Graveyard. There are said to be 150 wrecks entombed in the seabed, dunes and sandbars, giving Ripiro Beach another moniker – Shipwreck Highway. 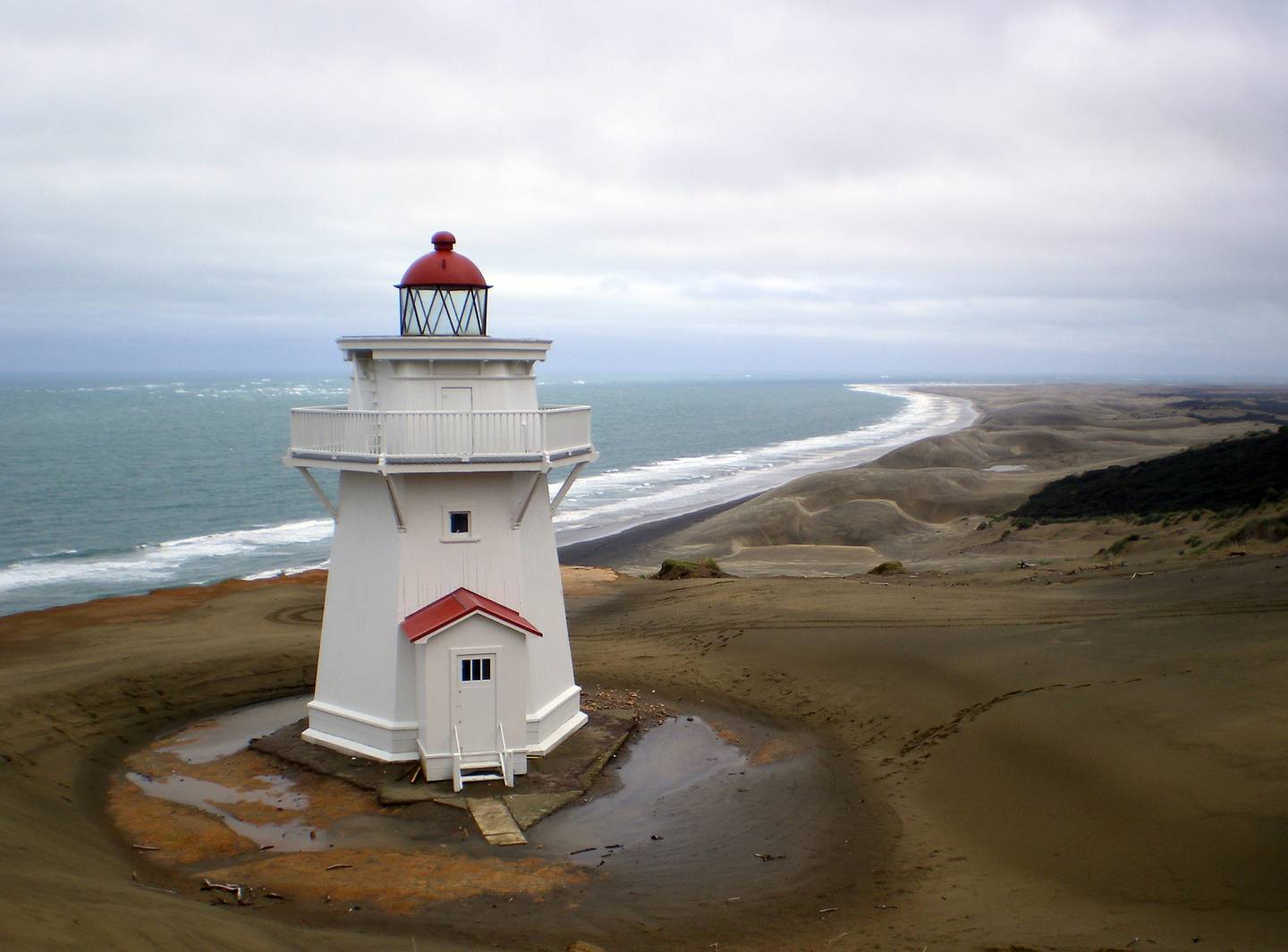 Among ships coming to grief on Ripiro Beach was L’Alcmene, a three-masted, 36-gun, French corvette wrecked at Baylys Beach in 1851, en route from Hobart to collect kauri spars from Whangaroa. Off course, with 230 people on board – 229 sailors and one passenger, a Swedish countess – the ship was driven ashore during a cyclone, with 12 sailors’ lives lost.

L’Alcmene and many other shipwrecks are displayed at Dargaville Museum, along with Māori artefacts including a war canoe found in a dune lake at Pouto, and the story of “Dalmatian” gumdiggers from Croatia.

Older people often recount tales of toheroa gathering on Ripiro. During the annual open season people came from all over, armed with spades and sacks for their fill of the large shellfish. But decades of commercial and private harvesting threatened the now protected toheroa’s survival. Collecting them was banned nationwide in 1982. 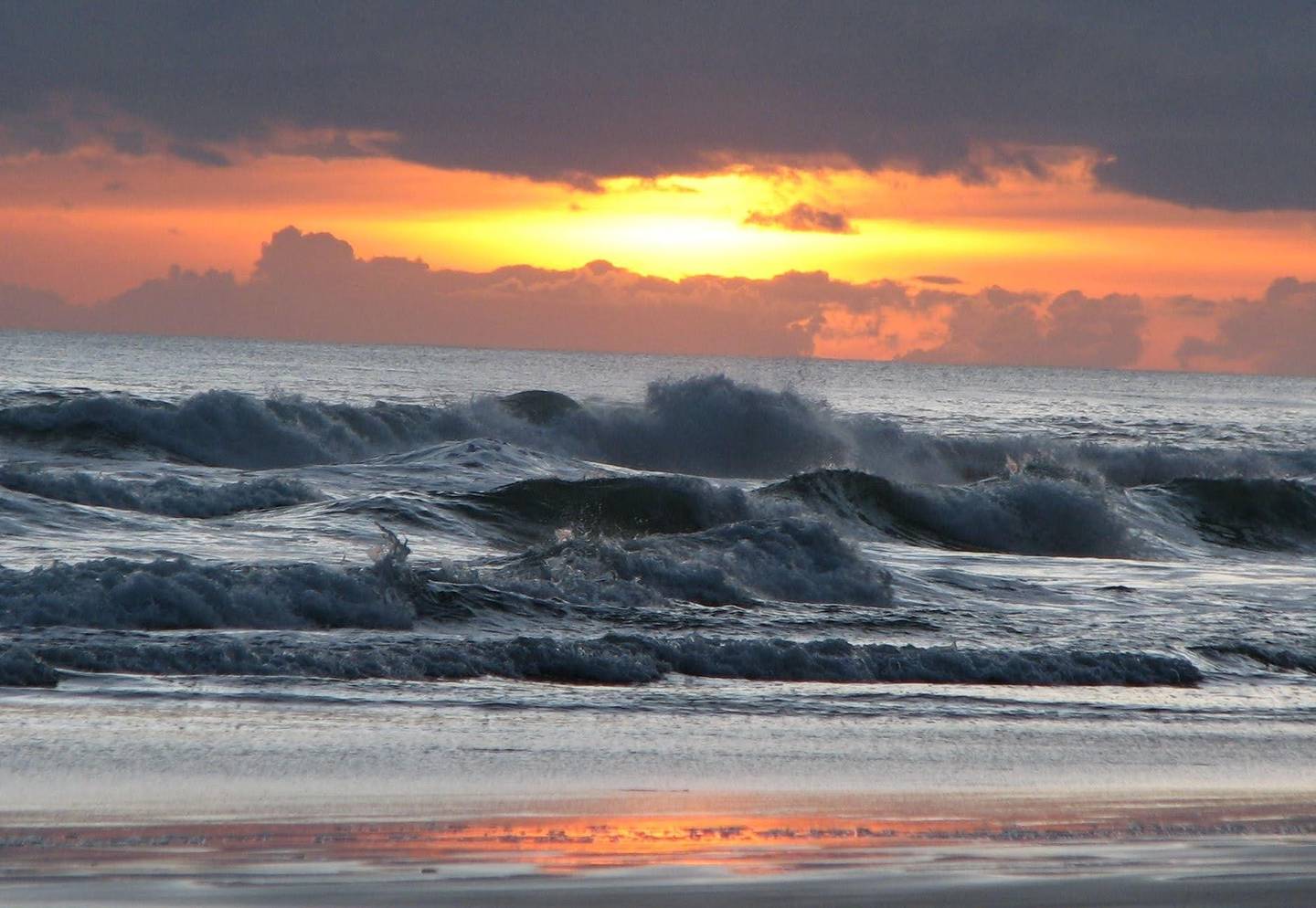 People still come for other kai moana caught off the beach; the surf lures board riders and the long ribbon of white sand (longer than 88km Ninety Mile Beach) is enjoyed by walkers, bird and sealife watchers, horse riders, blow-carters and two- or four-wheel drivers.

Tourism information describing this Tasman-swept coast as “New Zealand’s longest driveable beach” can give a false sense of security. Signs at access points ask visitors to stay off the fragile dunes, drivers to take only 4×4 vehicles on the beach and swimmers to go in only on incoming tides.

But it’s long been a playground, as beach settlements like Pouto, Glinks Gully and Omamari attest. The biggest, Baylys Beach (permanent population 350) is a tumble of baches straddling gullies and ridges, and a new-build subdivision called Sunset West. As the name suggests, glorious sunsets are a feature of the coast.

Another feature is the visible layers of prehistoric trees and lignite embedded in low cliffs near Baylys. Lignite is a soft, combustible wood-like rock formed from compressed peat, in this case from forests that stood as recently as 300,000 years ago.

In places, what first looks like brown rock reveals itself to be wood, remants of forests covered and uncovered during the shifting currents of passing millennia. Some strata contain a white layer of fine glass – volcanic ash carried from the Taupō eruption and preserved in swamps. 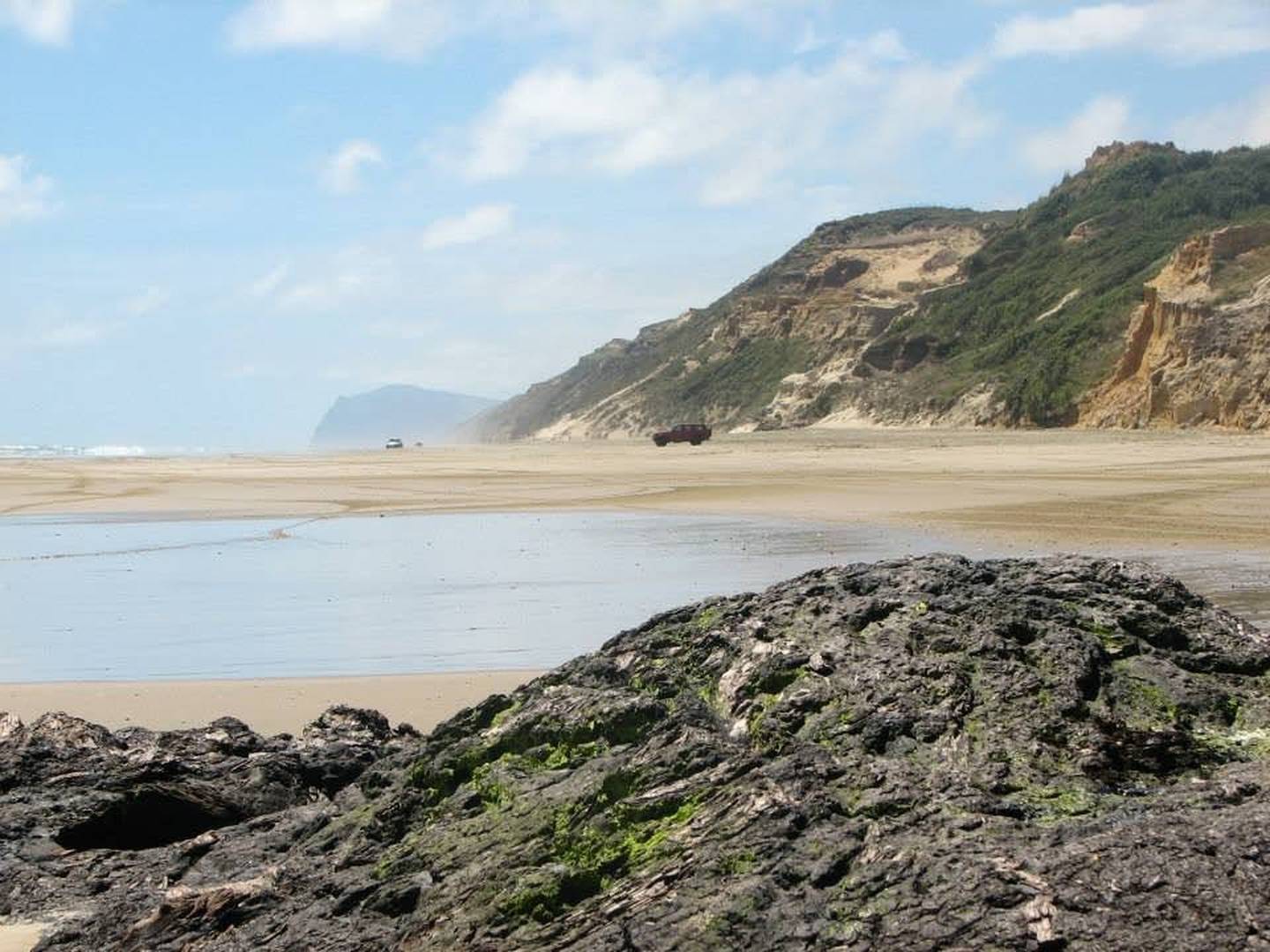 A less known story of Ripiro is a battle between Ngāpuhi and Ngāti Whātua. The battle, circa 1807, at Moremonui 12km north of Baylys Beach, was the first time warring Māori used guns against each other.

Learning of an advancing Ngāpuhi war party, some carrying muskets, Ngāti Whātua warriors beat the enemy after staging an ambush at Moremonui. Because of the number of dead strewn on the beach, the location was named Te Kai a te Karoro (the Feast of the Black-backed Gull).

This nationally historic event, the first of what would become the Musket Wars, is marked by an otherwise unsignposted, hard-to-find plaque 50m from the beach up the Moremonui stream.

One of the most popular Kauri Coast attractions is Taharoa Domain, better known as the Kai Iwi Lakes – only a few kilometres by road or walking track from the wild coast. Two of the three crystal clear, freshwater dune lakes are the largest and deepest of their kind in New Zealand.

Anyone wanting to stay at the lakeside campgrounds over Christmas-New Year must book months earlier or wait until the rush is over.

The Kauri Coast road journey ends at the Waipoua Forest, home of living giants thousands of years old. This is the heartland of local iwi Te Roroa who, with the Department of Conservation, employ “Guardians” to tell visitors about the forest, its history and its vulnerability.

The danger of kauri dieback disease has closed some tracks to famous trees but at Tāne Mahuta, the 2000-year-old “Lord of the Forest”, Guardians protect this remnant of the vast forests that gave the Kauri Coast its name. Things to do: Matakohe Kauri Museum and Dargaville Museum; Walking and cycling coastal, mountain and forest tracks, including the 4-hour round trip from Pouto village to the lighthouse; eco tours including along Ripiro Beach; quad bike hire or horse riding at Baylys Beach.

Enjoy your Vegas vocation with Caesars.com
List your rental for FREE on HolidayLettings
Deep Discounts on Hotels, Flights and Rental Cars on Priceline.com
Book your flight with Virgin Atlantic
Park Resorts offer great value UK caravan park holidays from as little as £69
Book and explore hotels & resorts with Radisson Blu
Leave a comment