How Gay Travel is Different (And Why it Matters) 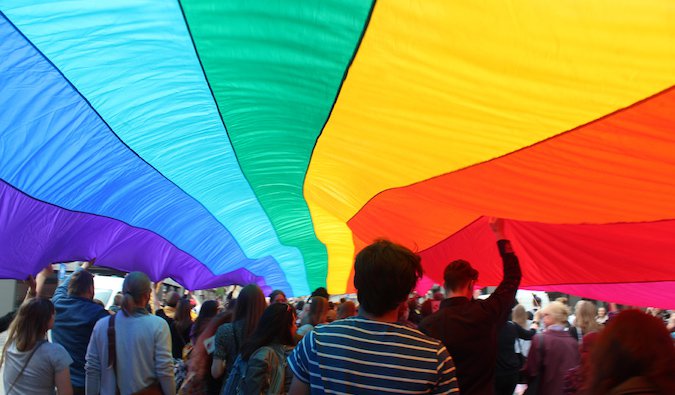 And just like every other type of traveler, we travel for our own personal reasons. Every aspect of what makes us unique also contributes to how, where, and why we travel. I travel because I love to travel, and I just happen to be gay.

That’s not to say I don’t also travel gay. Sometimes my sexuality also influences the how, why, and where I choose to visit a place. For example, I chose Berlin because I’d heard it was a gay hot spot, and I purposefully timed my trip to visit during the city’s annual gay pride celebrations, the Christopher Street Day parade — a time when I knew there’d be plenty of gay parties to attend and guys to meet. I was looking for a gay holiday (a gaycation, if you will), and I found it. Glitter and all.

But what does LGBT travel really mean?

It’s about safety, it’s about comfort, it’s about politics. But it’s also about welcoming events, friendly accommodation, and having fun with similar travelers.

There are still plenty of places around the world where being gay isn’t safe, nor is it comfortable — for locals or for tourists. But that doesn’t mean traveling as an LGBT individual is always dangerous. It’s frequently just a matter of having to know where and when one can disclose one’s sexuality through words or actions, and also the dangers or consequences (if any) for doing so. This is something straight people or opposite-sex couples almost never have to think about.

But in some places I’ve traveled, being gay isn’t even often considered an option. I’ve had awkward taxi rides in Jordan and Egypt, in Thailand and India: “Where’s your girlfriend? Why don’t you have a girl?”

I might respond with a visible sigh, trying to change the subject, or else a simple “I don’t have a girlfriend” and then avert my eyes and make myself look busy. In Jordan, at a café near Petra, one guy’s question was, “You gay?” Short and to the point. I replied with a grin and a “yeah”, and we left it at that, still sharing a bowl of hummus — just a bit quieter now.

Travel safety is different for every individual on every part of the LGBT spectrum. One friend (non-binary, genderfluid, queer identified) described to me an experience on a cruise to the Bahamas, where the ship hosted a “queer hour,” which was, in actuality, mostly heterosexual bachelor and bachelorette parties. And even when this friend tried to be “out” in their supposed safe space, they didn’t feel safe.

That’s not to say it’s all awkward, though. There was the time in Cambodia when I followed a group of backpackers from my hostel to what was supposed to be a cool local bar, the Lao-Lao Beer Garden. Little did I know it was also a hot spot for some of the gay locals, who after realizing I was gay offered me a number of tips for other LGBT things to see in the city.

Traveling somewhere as an LGBT traveler requires you to think about a lot of things:

The crowd-sourced website Equaldex.com curates LGBT rights and news around the world, and 76crimes.com reports on the 76+ countries where homosexuality is still illegal. Even the U.S. State Department publishes a useful page with LGBT travel information.

One of the joys of travel is meeting people and sharing experiences. But for LGBT travelers, it’s not always advisable to out oneself among strangers. Personally, as a gay traveler, I want to know and understand the world I’m in — so I seek out local LGBT organizations, places, events, and meet-ups (Couchsurfing, Meet-Up.com, and local LGBT have good lists of things going on) to learn more about the situation wherever I am.

There are lesbian, gay, bisexual, and transgender people all over the world. So when I feel safe to do so, I’m happy to talk about my sexuality, about who I am, with both foreigners and other travelers who might not immediately know another gay man.

All that said, traveling as an LGBT individual today is much easier than it used to be. In many places around the world, being gay isn’t much of a big deal anymore. And I suppose that’s the point about being gay and being a traveler today.

Many gay travelers I’ve spoken to have said the same. We don’t want to be labeled or put in boxes when traveling, and we’re certainly not always stereotypes. But the reality of the world is sometimes it’s just much more comfortable to travel to places already identified as LGBT friendly, to book with gay-friendly hotels, and to seek out other LGBTs abroad.

Over the next few months, I’ll be sharing my gay travel tips and stories here on Nomadic Matt. I’m really excited to share my big gay world of travel with you — it’s a subject often overlooked in the travel world. Pick up any guidebook and you’ll be lucky to find more than one or two gay bars mentioned for a single place, when in reality, there are many, many more (often underground, sometimes seedy, and usually a bit hard to track down).

Stay tuned for future posts about how to meet other LGBT travelers on the road (besides the obvious apps) and my tips for the best gay travel apps, destinations, festivals, and events. Comment below with other topics you’d like to see, or with any questions you might have about traveling as a gay, lesbian, bisexual, or transgender person.

The post How Gay Travel is Different (And Why it Matters) appeared first on Nomadic Matt’s Travel Site.