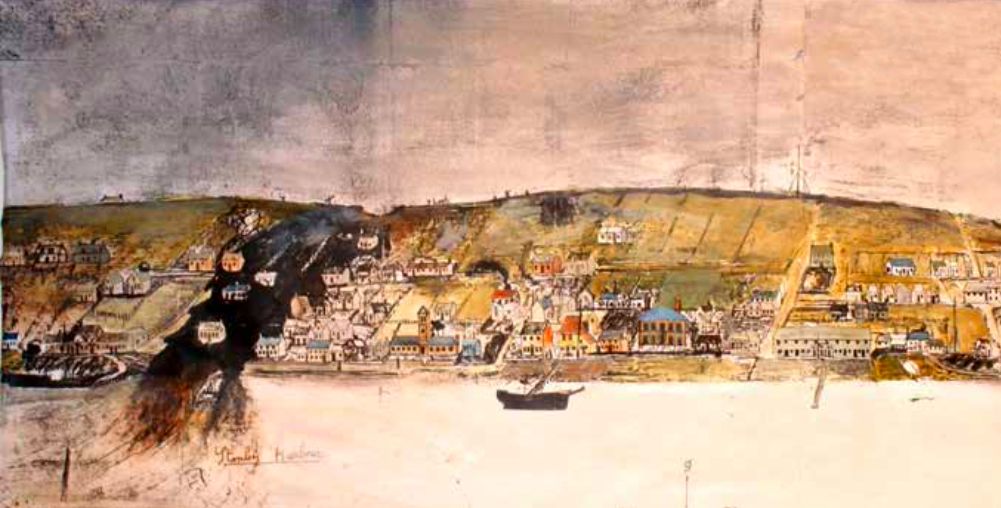 Penguin News published on the 15 January edition a historic piece on the two peat slips suffered by Stanley in 1878 and 1886, which caused unimaginable destruction and cut the settlement in two.

The peat ridge on the South side of the Bypass road, West of Teaberry Way appears recently to have been given the name ‘Smoky Ridge’. The ridge in question should properly be called ‘Peat Slip Ridge’ if we were to call it anything.

Early settlers in Stanley cut their annual supply of peat at the ridge, because at the time Stanley did not exist up the hill that far, so it was generally just Common ground. Because roads were virtually non-existent, cutting your peat near to Town was very convenient.

Hebe Street was originally just a cart track for hauling peat into town.

Peat cutting on the peat ridge was apparently rather haphazard, with no thought of draining water from the peat ‘bogs’ (or workings from where the ‘sods’ or squares of peat had been excavated) so the ridge became an unstable area with no firm ground to the North.

There were two occasions when the mass of wet peat slid down theridge, through the town and into the harbour, leaving a mass of destruction in its path.

The first happened on Friday November 29, 1878 at about midnight, the peat cascading downhill through the town at about five miles an hour and estimated to be several feet thick.

The Western and Eastern areas of Stanley were cut off, houses were filled with wet peat, fences and gardens ruined. Unimaginable destruction.

A trench was cut at the back of the hill to drain off the water, but sadly another peat slip occurred on the 2nd June 1886 with even more terrifying results. This slip happened about two hundred yards to the West.

Ian Strange, in The Falkland Islands quotes Governor Arthur Barkly. “A stream of half liquified peat over a hundred yards in width and four or five feet deep. It flowed suddenly through the town into the harbour, blocking up the streets, as to completely imprison the inhabitants. Fortunately the night was wet and stormy, almost everyone was indoors, and the few who were in the wrecked houses escaped in time. One child was unfortunately smothered in the peat, whose body has been recovered, but no other casualties are known to have occurred. An old man is however reported to be missing this morning, and it is feared he may also have perished as part of his house is almost filled with peat.”

Two people died in this peat slip. There was damage to the Exchange building and Holy Trinity Church, at the South or back wall. The clock tower was skewed by several feet. Later it was suggested that the site be used for the erection of a church, with the materials of the demolished building utilised. This is now the site of Christ Church Cathedral.

The accompanying pictures show people standing at the peat slip source on the ridge, wet peat cascading down Philomel Hill, and a painting from 1878 showing the peat slip from the other side of the harbour at the Camber. All illustrations are from the Falkland Islands Company collection, Jane Cameron National Archive.